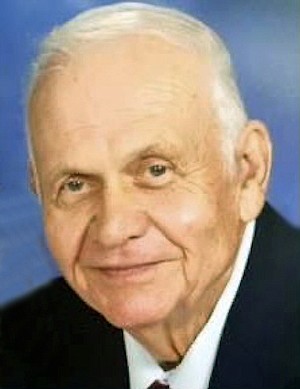 Bobby Ray "Bob" Hood, of Arkadelphia, Arkansas, passed away on Saturday, April 3, at the age of 88. Bob was born May 9, 1932, in Arcadia, Louisiana, to J.L. and Ima Swint Hood. He graduated from Homer (LA) High School in 1951 and Southern State College "SAU" in Magnolia, Arkansas, in 1954 where he played football for the Muleriders. He obtained a master's degree from East Texas State University in Commerce, Texas, and did postgraduate work at the University of Arkansas at Fayetteville. He served from 1955-1957 in the U.S. Army, including a year in Germany as the director of the American Youth Association and coaching athletics for the children of the Americans stationed at Bad Nauheim.
Following his military service, he coached athletics at Murfreesboro and Lewisville High Schools and became Principal of Lewisville and Lonoke High Schools. He spent the next 23 years of his career as the Superintendent of Smackover Public Schools. He was a member of the First United Methodist Church, the Lions Club, and numerous other civic and community organizations. After retirement, he moved to Arkadelphia and enjoyed playing golf and traveling.
He was preceded in death by his parents and his brother, James V. "Jim" Hood. He is survived by his wife of 66 years, Betty Sue Castleman Hood, and three children: Paige (Lynn) Hood of Atlanta, Georgia, Sarah (Frank) Hood Teed of Arkadelphia, Arkansas, and Jeff (Sarah) Hood of Fayetteville, Arkansas; and six grandchildren, Courtney Hood, Eric Hood, John Teed, Elizabeth Teed, Will Teed, and Colt Hood. Bob was an avid golfer and a loving and devoted husband, father, grandfather, and son. A strong, hardworking and compassionate leader with a dry sense of humor, he touched the lives of countless students, teachers and staff during his career in education and will be missed by many.
A memorial service celebrating Bob's life will be held at Ruggles-Wilcox Funeral Home in Arkadelphia on April 6, 2021, at 2 p.m., in the afternoon with family visitation afterward. Memorial gifts may be made to First United Methodist Church of Arkadelphia or First United Methodist Church of Smackover. Online Guestbook: www.ruggleswilcox.com