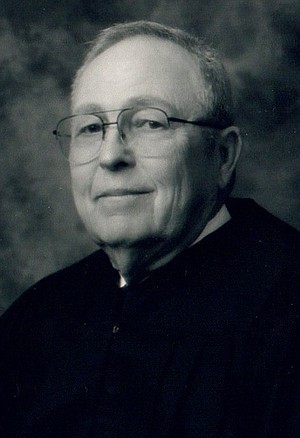 The Honorable Judge Van B. Taylor passed away Friday, August 6, 2021. He was born July 22, 1936. Judge Taylor was a Scott County native.
He is preceded in death by his parents, Flo Brazil Taylor and Claude E. Taylor of Waldron; his son, David Riley Taylor; his sister, Claudette Taylor; his faithful court reporter, Larry Shepherd; and many good friends that are happy to see him again.
Judge Taylor is a graduate of Arkansas Tech University and the University of Arkansas Law School at Little Rock. While practicing law in Waldron, Ark., he was elected as the youngest serving Arkansas State Representative. He moved his family to Dardanelle, and he was elected as the youngest presiding Chancery Judge in Arkansas. Judge Taylor served as a Chancery Judge for 30 years, and he relished living in Dardanelle, surrounded by close friends.
Judge Taylor is survived by his children, Matthew Taylor of Redmond, Wash.; Toni Taylor Meghreblian of Little Rock and her husband, David Meghreblian; Dr. Robert Taylor of Fayetteville and his wife, Amanda Taylor; his grandchildren, Micah, Jack, Hannah, Abigale, Lillian, Juliet, Clementine, Kate, Isiah, Eli, Nate, Noah, Cyler and Ryland; his siblings, Cathy Davenport of Farmington, Diana Christensen and her husband Scott of Omaha, Neb., and Don Taylor and his wife Juanita of Fort Smith.
Judge Taylor lived his final days in the splendor of Grand Village Retirement Community in Fayetteville, Ark., where he was treated like royalty. His presence will be missed. A private memorial service will be scheduled at a later date.
Cremation arrangements by Beard's Funeral Chapel.
Condolences at www.beardsfuneralchapel.com.