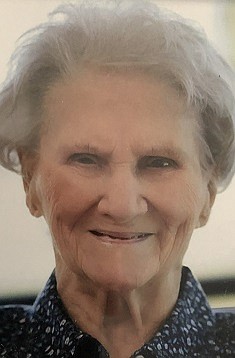 Helen Bess Ross Braswell was born in England, Ark., in June, 1926, and died there December 21, 2021, after having lived a most wonderful life enveloped by a community of friends and family who loved her and were loved by her.
She was preceded in death by her parents Tom and Ada Bess Ross, her brother J.T. Ross, and her husband George.
Growing up in England was fun and appeared idyllic to her in spite of the Great Depression and World War II that started while she was in high school. She was a bright student who enjoyed the band, cheerleading, her friends and being outdoors as much as possible. She graduated from England HS in 1944 and from Arkansas State Teachers College in 1948. She moved to Bearden for "practice teaching" and, following graduation, taught Home Economics there where she met and married George, her husband of 53+ years, in 1949. They lived then in Kingsland, North Little Rock, Louisiana and Mississippi before returning to England in 1958 to live out their lives. She taught first and second graders in England for the next 28 years, retiring in 1986. She and George then had many wonderful years of retirement spent mostly traveling around the US with their travel trailer and their RV friends.
She was a member of England First Methodist Church for about 63 years and was active in Circle Two there. She enjoyed tending her flower beds, feeding her hummingbirds, pulling weeds and raking the leaves from her yard. She was a master cook and was referred to as "Miss Home-Ec" by many who enjoyed her fantastic meals. She enjoyed her walks with George, playing with her kids and grandkids, her years of church work, going fishing and she always planned to someday learn to play golf… maybe she will? She was cute. She was fun.
She is survived by her children: Becky (Buddy) Jones and Tommy (Sharon) Braswell; grandchildren Jayson (Jennifer) Jones, Robyn (Cecil) Clark, Leah (Erica) Braswell, Hunter (Courtney) Norton and Winfrey Norton; and her great- grandchildren: Ali, Preston, Harper and Emma Jones, Landry Clark, Ross and Reid Braswell, and Lawson and Nash Norton; plus many loving nieces and nephews.
Her family appreciates the special caregivers at Cavalier Nursing Home in England during her last three+ years of life and for Sherri Rushing who provided several years of in-home assistance prior to her entering the nursing home. They also appreciate Dr. Brad Baltz for his treatment which added many years to her life following a diagnosis of cancer in 2001.
Helen Bess' life will be celebrated in a service at England First Methodist Church at 2:00 PM on Sunday, December 26, with a reception in the Fellowship Hall following the service. All are invited and the wearing of masks while indoors is expected. The family asks that in lieu of flowers memorials be made to the First Methodist Church, 200 NE Second St, England, Ark., 72046, or a charity of your choice.
Online guestbook: www.rollerfuneralhomes.com/england.