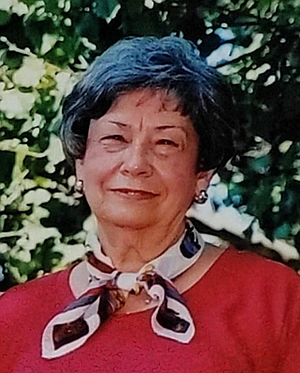 Jessie Marie McCoy Hairston left this world peacefully and surrounded by loved ones on December 12, 2021. She was born April 17, 1932 in Huntsville, Ark., to Ray McCoy and Nancy Ellen Barnes. Jessie spent her early years in Hindsville and in Tulsa, Okla., graduating from Huntsville School of Vocational Studies in 1948. She worked for Coger Drug until meeting Gale Hairston, the love of her life. They married in 1952 and would remain so for the next sixty-seven years. Their early years were spent traveling around the Midwest as Gale worked on the Interstate System. Eventually, they came to build a home on a small farm in the Oak Grove community. This is where they would raise their three sons and assist with countless other neighborhood kids. Jessie was a scout mother, PTA officer, Sunday School teacher, and even a fraternity mom. Although she assisted Gale with his finances and records as a contractor, her main occupation was a licensed optician. Through education and training, she became part of the ophthalmological team, performing the first laser surgeries in Arkansas. Though very proud of technical work, she loved the interactions with clients the most.
Jessie was preceded by her husband, Gale; sister, Jean McCoy; and brother, John McCoy. She is survived by three sons and their wives: Dennis and Lori Hairston, Oklahoma City; Bill and Cathy Hairston, Fayetteville; and Jeff and Samantha Hairston, Midwest City, Okla. She is also survived by grandchildren: Lauren Collado (husband Paul), Wichita, Kan., Hayden Hairston, Little Rock; Ellis Hairston, Fayetteville; Anna Hairston, Oklahoma City; Emily Hairston, Stillwater, Okla.; and one great-grandchild, Louisa Collado, Wichita, Kan., along with cousins, Georgia Thompson, Patty McCoy, and the Buckley Brothers, and the nieces and nephews: Sherry, Dwayne, Steve, and Mike.
A visitation will be held on Thursday, December 30, 1 p.m. at Westfield Chapel in Springdale. There will be a 2:30 p.m. Graveside service at Elm Springs Cemetery. In lieu of flowers, donations may be made to Willard Walker Hospice House.
Online condolences www.WestfieldChapel.com.