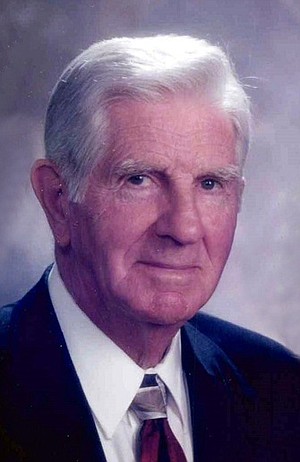 Morris Harmon Carlisle, 96 of Beebe, Ark., was born July 16, 1924, at Hickory Plains, Ark., and he died Wednesday February 17, 2021. He was born the second child of six to Herbert and Elva Carlisle of Hickory Plains, Ark. Morris graduated from Beebe High School and attended Beebe Junior College. He transferred to Ouachita Baptist University on a basketball scholarship, graduating in June 1950 with a B.A. in Business and Physical Education.
Morris served in the Navy from September, 1943, until being discharged in April of 1946. He received advanced training with the U.S. Seabees, the construction battalion. He served in England and Guam.
Morris taught and coached in Carlisle, Ark., then moved to Cabot, where he coached three different sports. He then went to work for Redmond Motors in Jacksonville for a number of years in quality control. Morris owned and operated a Western Auto store in Beebe for several years. He finished his working career at Foothills Vo-Tech in Searcy.
He was a lifelong member of the Methodist Church and was an avid golfer. Morris married the love of his life Dorothy Walters in 1947. They were married 65 years till her death in 2013.
He was preceded in death by his parents; wife; three brothers, Wilford, Troy and James; and one grandson, Jared Price. He is survived by his three children, Vicky Davis of Sherwood, Jerry (Suzanne) Carlisle of Little Rock, and Jan (Ed) Price of Beebe; four grandchildren, Brian (Christie) Campbell, Erin (Kristi) Price, Caryn (Randy) Metcalf, and Chris (Abby) Britt; and eight great-grandchildren; two sisters, Margie Speight and Camilla Ferguson; and numerous nieces and nephews.
Family will receive friends and family Thursday from 6:00 to 8:00 at Smith-Westbrook Funeral Home in Beebe. Funeral service will be 2 p.m. Friday, February 26, at the Beebe First United Methodist Church, with burial at Hickory Plains Cemetery. Memorials may be made to First United Methodist Church, P.O. Box 247, Beebe, Ark. 72012, or the Hickory Plains Methodist Church, 9952 Hwy. 13N, Carlisle, Ark. 72024. Arrangements by Smith-Westbrook Funeral Home. www.smithfamilycares.com