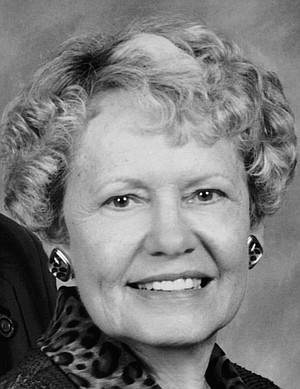 Elinor "Elly" Mae Osborn, age 93, of Fayetteville, died Friday, December 25, 2020. The family announces the passing of Elinor Mae Osborn, 93, Fayetteville, Arkansas, at a hospice facility in Fayetteville. Mrs. Osborn a former resident of Emporia, Kansas, was born on October 25, 1927, in Norwood, Pennsylvania. She was the daughter of the late Buell Sherman Shaw and Marion Balzer Ferguson Shaw.
Beloved wife and best friend of George Carlile Osborn. They were married April 14, 1949. Loving mother of Brett Osborn, Todd (Lisa) Osborn and Jill Osborn. Proud grandmother to Ian (Katya) and Morganne Osborn and Danny Adler, and great-grandchildren, Andrew and Alexis Osborn. Elinor's beloved sister, Virginia Elsie Daniels passed away in 2014, and beloved brother, Vernon (Rex) Buell Shaw passed away in 2002.
As a young girl Elinor lived in Aruba, Netherland Antilles while her father worked in construction building an oil refinery. The family returned to live on a farm near Parkerville, Kansas. Her father left to work in Hawaii and was at Pearl Harbor when it was attacked in 1941. Elinor and family had moved to Emporia during World War II, and she graduated from Roosevelt High School. She attended Kansas State Teacher's College and was a member of the Sigma Kappa Sorority where she met her future husband George Osborn. Elinor started work as a secretary at Westamerica Securities in Emporia. She and her husband became Investment Advisors with Raymond James, for 40 years in Emporia.
Elinor and George had a passion for traveling and visited more than 60 countries together. Elinor was a member of the First Congregational Church and Philanthropic Educational Organization Chapter in Emporia.
Elinor and George retired and moved to Butterfield Trail Village in Fayetteville, Arkansas, in 2009. She always had a smile and a warm greeting for friends and neighbors. A private Memorial Service will be scheduled later date. Online condolences www.WestfieldChapel.com