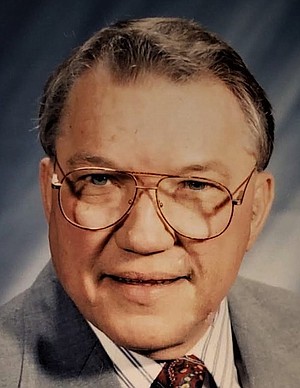 Dewane L. Hendrix, of Roland, Ark., originally named Louis Dewaine Hendrix, passed to God's arms January 17, 2021. He was born November 26, 1937, in Start, La., the middle child of seven children. His father moved the family to an area south of Crossett, Ark., then abandoned them. When Dewane was 12, his mother Rena Letlow Hendrix died at 38, and the children went to foster homes. Dewane and his brother Kenneth were fortunate enough to be raised by wonderful, loving foster parents, Lexie and Roberta (Bert) Woods, who introduced them to their Baptist faith and a comfortable, loving home where Dewane began to thrive. Lexie allowed Dewane to obtain a name change and thereafter be known as Dewane L. He worked hard in the family Oakhurst Superette and enjoyed his church and working with the community, using his keen intellect and developing an outgoing, generous attitude under Lexie and Bert's guidance. He graduated from Crossett High School where he enjoyed playing in the marching band and in a smaller Dixieland jazz band. He graduated from Georgia Tech in Atlanta, Ga., earning a degree in Industrial Management. While there, he joined the Army reserves, then attended Officers Training school obtaining the rank of Second Lieutenant. Dewane's plans for a military career ended when his sister, Sylvia, introduced him to her college roommate, Marjorie Moss, who had moved to Crossett to teach. They became a devoted couple and best friends, with a marriage that began May 23, 1964, and lasted over 56 years. Dewane began a career in insurance, first as an insurance adjuster, then as a part owner of Chico-Lipe Insurance Agency in Eudora, Ark. In those jobs he met many friends and years later was hired by the Arkansas State Department of Education to run a self-insurance program that became highly successful and saved millions of dollars for Arkansas schools while he administered it. He earned a reputation for being smart and fair and was hired away for a similar program with the Arkansas School Board Association, retiring in 1998. In retirement he enjoyed running the C.W. Woods deer camp near Crossett, where he found much pleasure teasing friends and telling jokes but not doing much hunting. He also devoted time to vacations with his children and grandchildren to Canada and Florida and to see most of the USA with Marjorie. His friends will never forget a trip to Mexico with Dewane amusing with jokes and pranks. Dewane is predeceased by his mother, his foster parents, his brothers, Willard, Kenneth and Charles Hendrix and his sister, Sylvia Selk. His sisters, Remona Hisaw and Carolyn Thomas survive him. His beloved wife, Marjorie, also survives him along with his cherished family: daughter, Kelly Westerman and spouse, Paul of Hutto, Texas, and son Dr. Barry Hendrix of Paragould, Ark. He is survived by 19 precious grandchildren: Jennifer Westerman Farrell (Shawn), Sarah Westerman Rock (David), Mary Stege (Paul), Zachary Westerman, Katherine Westerman, Emily Westerman, Caleb Westerman, Gabriel Westerman, Tabitha Westerman, Victoria Westerman, Natalie Westerman, Richard Westerman, Jonathan Westerman, Lexie Hendrix, Sallie Hendrix, Slade Hendrix, and Isaac Hendrix. He is also survived by six great-grandchildren; Rebecca and Jonah Farrell, Aaron and Elizabeth Lee, and Claire and Paul Stege. His survivors also include several beloved nieces and nephews, cousins, uncles and his very dear friends, Bob Shaver, Danny Night and Tommy Venters. The family deeply appreciates the many good doctors, nurses, and caregivers who have compassionately cared for Dewane, especially Robert, who transported him with such tenderness, kindness and humor. Dewane often said he was a lucky man and every day was Thanksgiving! We will miss him severely, but his legacy of laughter and the lessons he taught us about life will remain. Merry Christmas!
Graveside services will be 10:30 a.m., Wednesday, January 20, at Oakland Cemetery with Rev. Wayman Mann officiating. Visitation 30 minutes prior to his service, at Oakland Cemetery. In lieu of flowers, please consider a donation to the Veteran's Museum of Warren Ark., 201 North Main, Warren, Ark., 71671, or St. Judes Children's Research Hospital, 501 St. Jude Place, Memphis, Tenn., 38105.