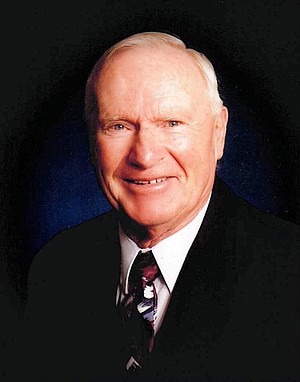 William (Bill) Adolph Danenhauer was born on June 3, 1934, on the family farm in Clay County, KS near Clay Center. He is the son of Carl and Mary (Nemnich) Danenhauer. Bill graduated from Clay Center High School in 1952. He then went on to the College of Emporia in Emporia, Kan., where he played football and was a Three-time Little All-American. He graduated in 1956 with a Bachelor's of Science degree in Education. While in college he also served in the National Guard. He then married Agatha (Aggie) Smock on June 3, 1956. Bill was then drafted by the Baltimore Colts in 17th round of the 1956 draft and played for two years. He, Aggie and son Bill Jr., moved back to Kansas and Bill worked at the local Gas Company in Glasco. In 1960, the family moved to Denver because the AFL was starting a new league, and team, the Denver Broncos. They asked him if he knew of anyone else who might be good enough. He suggested his brother, Eldon, so they made a deal and the Broncos had their first set of brothers. He played for one year as a defensive lineman for the Broncos and was then traded to the Boston Patriots at the end of the season. He then moved onto coaching and education at Adams City High School in Commerce City, Colo. In 1970 the family moved to Omaha, as Al Caniglia recruited Bill to be the Defensive Coordinator and Assistant Wrestling Coach. In 1975 he became the head football coach at UNO. After 1977 Bill finished out his career as a scout for the NFL. In 1991, Bill and Aggie moved to Bella Vista, Ark., where they lived for 30 years. Bill continued to scout until 1997.
Bill is survived by his wife of 65 years: Aggie; children: Bill, Jr. (Donna) Danenhauer of Omaha, Bob (Shelley) Danenhauer of Omaha, Becky (Todd) Thatcher of Delta, Colo., Brenda (Mike) Bland of Gretna, Neb.; 11 grandchildren; 17 great-grandchildren. Bill was preceded in death by his parents: Carl and Mary Danenhauer; sister: Carolyn Baird; brothers: Jim and Eldon Danenhauer; and infant son: Carl Lee.
Memorial Service 11 a.m., Monday (7/5/2021) at Gretna United Methodist Church 11457 S 204th St. Gretna, Neb., 68028. In Lieu of Flowers Memorials to Single Parents Scholarship Fund of Benton County spsfbc@spsfbc.org, 2601 SW D St, Bentonville, Ark., 72712.
Roeder Mortuary, Inc. - Gretna Chapel
11710 Standing Stone - Gretna, Neb. - 402-332-0090.
www.RoederMortuary.com.