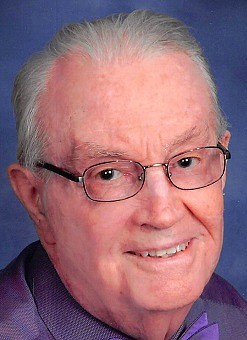 David Andrew Rector, 93, of Bigelow passed away on July 10, 2021. He was born April 16, 1928, in Memphis, Tenn., to the late David Oscar and Edith Frances (Smith) Rector. In addition to his parents, David will be welcomed into Heaven by his wife of 62 years, Irma Rector; daughter, Sandra Goodman; son-in-law, Ronald Goodman; and brothers, Jacob and Eugene Rector.
David was a man of God and longtime member of First Assembly Church in Jacksonville. He and his wife, Irma, held sermons for 18 years at the Spring Creek Living Center, and occasionally Woodland Hills Nursing Home. As a career, David was a successful real estate broker for over 40 years and in his spare time, David enjoyed bird-watching and tending to his vegetable garden. David was happiest when his entire family got together for family reunions.
Those left to cherish David's memory include his beloved dog, Pixie; his children, Elizabeth (Richard) Nelson, Darryl (Sara) Rector, and Paul (Gayla) Rector; sister, Rita Euler; and numerous grandchildren, great-grandchildren; and great-great-grandchildren that he adored.
Funeral services will be 2 p.m. Sunday, July 18, 2021, at Moore's Jacksonville Funeral Home. Visitation will be 6 p.m. to 8 p.m., Saturday, July 17, 2021, at the funeral home. David will be laid to rest next to his wife in Chapel Hill Memorial Park immediately following the service. Arrangements by Moore's Jacksonville Funeral Home, (501) 892-2136.