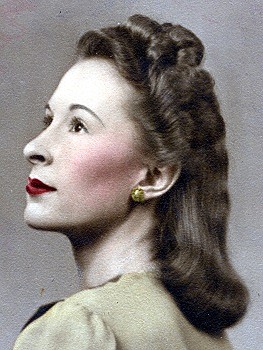 Helen Hawkins of the Harmony Community, near Williams Junction, Perry County, Ark., died 18 July 2021, from complications of a debilitating stroke. She was preceded in death by her parents Floyd and Gertrude Lloyd; and her husband of almost 70 years, Clarence D. Hawkins.
She is survived by her sister, Edith Doughty; children, Harriett H. Miller (Robert), and Keith D. Hawkins (Rayma Jean); three grandsons, and three great-grandsons.
Helen was born 9 February, 1925, at home in the Bonnerdale community near Hot Springs. She spent the bulk of her formative years living in temporary logging camps with her parents in the Maumelle River Valley. In 1937, the family settled permanently at their beloved ‘Pin-Oak Flats' homestead in Harmony. After the move to Harmony Helen attended and graduated from Perryville High School. She played on the basketball team and maintained a keen interest in the sport most of her life.
She was a member of the "Greatest Generation". Wishing to contribute to the war effort she pushed aside fears of the unknown, sought employment at the Jacksonville Munitions Plant and moved to Little Rock. She lived on Scott Street in a boarding house with three other young ladies who were also employed at the munitions plant. The lessons she learned about self-reliance and the ways of the world were invaluable.
On 8 November 1945, Helen married Clarence D. Hawkins, who had just returned from the Pacific Theater serving his country in the U.S. Navy as a Seabee. They initially traveled around the state working highway and bridge construction projects but wanted to settle down and start a family. They bought 120 acres of timberland in Harmony that abutted her parent's Pin Oak Flats and started construction of a permanent home. The native rock house, principally built by Clarence's father, James F. Hawkins, was Helen's pride and joy. She worked hard at making her treasured Big Branch Farm a joyful place filled with flowers, shade trees and birds.
Helen preferred life on the farm but managed to travel to far-away places only because she wanted to visit her children in their homes. She traveled to Guam in the Western Pacific; England; Alaska; California; and numerous other states.
Helen was the last surviving founding member of the Perryville First Assembly of God Church. She was extremely proud that the timber to build the original church came from her Farm. She devoted most of her adult life to the success of the church. She was also a fierce advocate for a representative, two political party system for her county and the state. She bravely fought the powers of the one party machine that ruled Perry County and took great joy and pride in the eventual victory.
Harriett and Keith would like to extend a special thanks to Jareta Doughty Barton of the Blue Jay Community for the love and attention she gave their Mom. They call Jareta their Sister and an Angel. With Jareta's devotion Helen was able to live largely independent in her home to near the end.
"Ms. Helen", her Country Lady wisdom and fearlessness will be sorely missed. A graveside service and internment at the Harmony Baptist Cemetery will be a private family event at a later date. Online guestbook: www.harrisfuneralhome.net