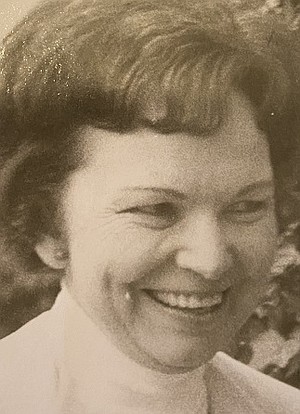 Mary Sue Freeman Kerr, 89, of North Little Rock and Cabot, Ark., beloved by her family and many friends, passed away peacefully in her sleep July 19, 2021.
She was born January 18, 1932, in Cabot to the late Milton Smith Freeman and Ethel Marie Patrick Freeman, and grew up in Cabot and North Little Rock, graduating from NLRHS in 1949. She met her husband, Bill A. Kerr, when they both worked at Woolworths in Little Rock. They married in 1950 and together they raised two boys. Bill and Mary Sue led a blessed life and after Bill retired from Southwestern Bell, were able to enjoy many years together traveling. They reached their goal of visiting all 50 states as well as a dream trip to the Holy Land. Bill and Mary Sue were members of First Baptist NLR for many years before moving back to Cabot where they both were active members of Cabot First Baptist Church. After Bill's death in 2004, Mary Sue enjoyed "running around" with the ladies of her Sunday School class.
Mary Sue is survived by a son and daughter-in-law, Gary and Bonita Kerr of Maumelle; grandchildren, Andrea Billingsley (Kevin) of Cabot, Chad Smith (Melissa) of Fayetteville, Ark., Nick Kerr (Sarah) of Maumelle; Lanie Kerr of Little Rock, and Josh Kerr of Seattle, Wash., and their mother, Leslie Williams; 10 great-grandchildren; two great-great-grandchildren; nieces, Lori Jordon and Lisa Leuck (Michael); and nephew Joe Freeman; as well as many extended family members.
She is now rejoicing in Heaven with her loved ones that went before her; her parents, her husband, Bill Kerr, their son Mark Kerr; and her brother Milton Freeman; along with all the other saints.
Mary Sue will be laid to rest on Thursday, July 22nd, at 10 a.m. in a Graveside service at Mt. Carmel Cemetery, Cabot, Ark. In lieu of flowers, memorials may be made to First Baptist Church, Cabot, Ark. Online guestbook www.SmithFamilyCares.com