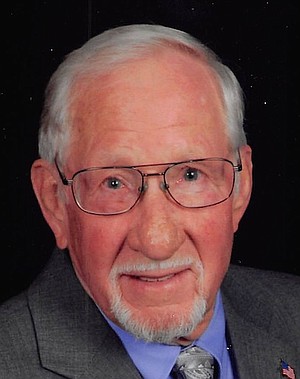 Glen Paul "Pete" Clements, 89, of Cabot, passed away Tuesday, July 27, 2021, after a long illness from dementia and COPD. He was born June 22, 1932, in Levy, Ark., to the late Robert and Era Clements. Pete was the third of ten children, six sisters and three brothers, and was the last survivor of his family. He proudly served his country in the United States Marine Corp from 1950-1953. Pete met his wife of sixty-seven years, Joann Douglas, in 1954, at Whitley's Drug Store where she worked the soda fountain. They had dated less than six months when they were married. He worked as a welder/pipe fitter for thirty years and was a member of Union #155. Pete was very community minded and served in many capacities as a community leader.
After serving several terms on the Cabot City Council, he was elected Mayor of Cabot and served from 1979-1984. He then worked for the State Department of Health until 1998 and the Arkansas State Medical Licensing Board until 2012. Pete was a 32 degree Mason and member of Cabot Lodge 319, a Shriner, and member of the Al Amin Shriner's Temple in Little Rock, and a member of First Baptist Church in Cabot. He loved to fish and made several trips to Canada to fish with friends and family members.
In addition to his parents, Pete was preceded in death by his nine siblings and son-in-law, Danny Willeford of Longview, Texas. Left to cherish his memory are his wife, Joann Douglas Clements; two daughters, Glena (Steve) Tipton of Cabot and Sherry Willeford of Longview, Texas; four grandchildren, Dana (Brock) Willeford Lynch, Byron (Miranda) Tipton, John Stephen (Kendall) Tipton, and Kevin (Rilee) Tipton; nine great-grandchildren and numerous extended family members and friends.
The family respectfully requires all in attendance to wear masks due to the ongoing COVID-19 virus. Funeral services will be 10 a.m., Friday, July 30, 2021, at First Baptist Church Harold O'Bryan Fellowship Hall in Cabot, with Dr. Rex Horne officiating. A private family interment will follow at Sumner Cemetery. There will be an informal visitation from 1-5 p.m., Thursday, July 29, 2021, at Moore's Cabot Funeral Home, 501-843-5816. The family suggests donations in memory of Glen Paul Clements be made to Baptist Health Hospice, 11900 Colonel Glenn Road, Suite 200, Little Rock, Ark., 72210; online at: https://www.baptisthealthfoundation.org/donate or Hospice Home Care, 2200 South Bowman, Suite A, Little Rock, Ark., 72211; online at: https://www.hospicehomecare.com. Please sign the online guestbook for the Clements family at: www.moorescabotfuneralhome.com.