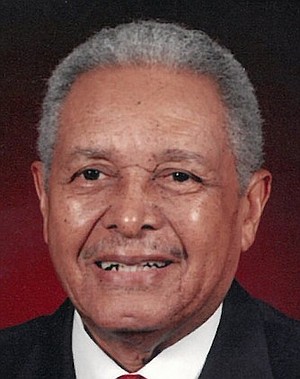 Walter Jones, of Little Rock, Ark., made his peaceful transition on Monday, July 26, 2021. He was born in Greensboro, Georgia, on April 30, 1929, to the Late Elder John Wesley Jones and Addie Rhee Barnhart Jones. He was the second oldest of three children; one sister, Johnnie Reba Jones and one brother, Wesley E. Jones were born to this union. Walter accepted Christ at an early age and has been a faithful member at Springfield Baptist Church, in Greensboro, Georgia, until his peaceful transition. A few of his favorite sayings: "My God is in the blessing business, I don't know about yours" and "You can't get to heaven unless you die". He has always believed in the Godhead: God the Father, God the Son and God the Holy Spirit. His ever-believing trust and faith persuaded him to follow Jesus Christ throughout his life.
Jones was educated in the Greene County School System in Greensboro, Georgia. He joined and served in the United States Air Force from May 18, 1950, to August 31, 1973, (23 years). He was a Korean Conflict, Vietnam Era and Peacetime veteran. He held numerous positions while serving. He earned a Masters Degree in Business Administration from Philander Smith College. He served as college professors at Philander Smith and Shorter Colleges, in Little Rock/North Little Rock, Arkansas. Also, he graduated from the AGAPE Church Agape School of World Evangelism (ASWE). Additionally, over the span of his career, he was a "Jack of all Trades," a mechanic, a barber, a teacher, business mentor to young entrepreneurs, and offered guidance to anyone who seemed to need help, etc.
He leaves to cherish is memories his loving and devoted wife, Gloria Stephens Jones of Benton, Arkansas. He was preceded in death by his parents, sister, and brother. Also, he leaves behind two daughters: Maxine (Glenn) Smith of Conway, Arkansas, and Risha (Tomiko) Sydney of Panama City Beach, Florida; and one son: Frankie (Flint) Chatwood of Little Rock, Arkansas. He is also survived by five grandchildren; Glennesia Skipper of Conway, Arkansas; Tamara (Landon) Brethouwer of Texas; Joseph Smith II of Conway, Arkansas; Jeran (Nicole) Smith of Greenbriar, Arkansas; and William Smith of Omaha, Nebraska. He also leaves seven great-grandchildren; Michael and Reanna Profit and Savannah Skipper, Zein and Zaiden Brethouwer, and Ryleigh and Lincoln Smith. Also left to cherish his memories, a host of nieces, nephews, and friends.
Funeral Service will be 10:30 a.m., Wednesday, August 4, 2021, in the chapel of Griffin Leggett Healey & Roth, 5800 W. 12th Street, Little Rock, 72204, 501-661-9111 with Pastor Willie Pete officiating. Burial with Military Honors will be 12 p.m., Wednesday, at Arkansas State Veterans Cemetery, 1501 West Maryland Avenue, North Little Rock, Ark. Visitation will be 9:30 a.m., Wednesday, until service time at the funeral home. To sign the online guestbook, click "Add A Memory" at: www.griffinleggetthealeyroth.com