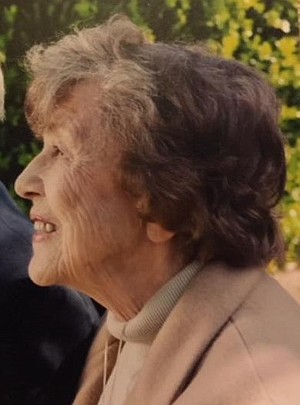 Marie Grady Fair was born in the little town of Horatio, Ark., on June 4, 1924, to Lillie Friday and I.R. Grady. Marie was the third of five children and outlived her siblings Col. John Wesley Grady, William H. Grady, Evelyn Madison and Marjorie Carter. She was blessed to be raised in a happy home by a loving family the source of many fun-filled memories. They were poor in material things but that didn't seem to matter so much in those days.
Marie was educated in the Horatio Public Schools, Henderson State Teacher's College and the University of Arkansas, where she graduated with a Master's Degree in Science. She was surrounded with teachers and friends all of her life who gave her encouragement and inspiration.
In 1946, she married Paul R. Fair and they shared many adventures throughout their 75 years of marriage, up until his death November 15, 2020. They had two children: James Richard Fair of Madison, Wis., and Melinda Fair of Little Rock. In addition to their children, Marie and Paul are survived by five grandchildren: Amanda Fair, Erin Lorenzen, Matthew Fair (Cristina), Casey Lorenzen (Bailey), Sky Cardwell; and two great-grandchildren.
Marie taught in the public schools for 16 years, primarily as a biology teacher at Hall High School in Little Rock, where she taught many of the medical professionals in Little Rock. Later she taught educational
methods courses for the University of Arkansas at Fayetteville and Little Rock.
She held may positions of responsibility and leadership in her church - St. Paul Methodist in Little Rock, including Christian Education Director, Sunday School teacher, lay leader, and President of the United Methodist Women.
Marie was employed at the Pentagon in our nation's capital during World War II, which resulted in quite an adventure for a small-town girl. She traveled to many places over the world during her lifetime but Washington D.C. was her favorite city to visit. She was enthralled by the majesty and beauty of the monuments and memorials which honor our patriots and founding fathers.
She was a good and loving wife, mother and friend. In attempting to sum up her life, she said "I am proud of my husband, children and grandchildren. I loved God, life, family, friends, nature, sports - everything. I aspired to being a noted singer, a professional athlete, a renowned writer or a great artist, but did not become a star performer in any of those endeavors, but I did try them all and it was such fun.
Thanks be to God and all of you, who made my life on Earth such a happy one.
A memorial service honoring the lives of Marie and Paul Fair will be held at St. Paul United Methodist Church at 10 a.m. on Tuesday August 10th. A graveside service at Primrose United Methodist Church for Marie will follow at noon. Memorials can be made to St. Paul United Methodist Church or the charity of your choice. Sign the online condolence book at RuebelFuneralHome.com