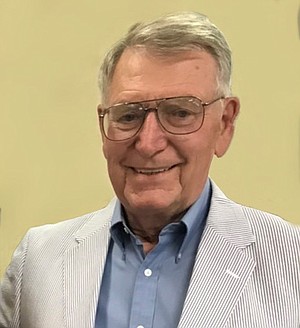 Patrick James Mitchell passed away at home June 4, 2021. He was born February 9, 1941 in Camden, N.Y., to James Joseph Mitchell and Cecelia Johanna Manley Mitchell.
Pat graduated from Camden High School in Camden, N.Y. Shortly after, he started his lifelong career in the wire industry. He worked for Camden Wire Company for 30 years. He transferred with the company to Pine Bluff in 1983. In 1989 he began working for Central Wire in Dumas and retired from there in 2008. Pat loved his work and was a mentor to many in the wire industry. Pat was one who could never stay idle. When not working, he enjoyed golfing, hunting, fishing, and spending time with family. If you knew Pat, you knew whether or not he liked you. He was not one to mince words. He had a quick, dry wit.
Pat is survived by his loving wife and best friend Nancy DeMoss Donaldson who was always by his side. He is also survived by his children, Carla(Terry Rowland) Burgey of Kingsland, Bryan(Robin) Mitchell, Patricia Stewart, Bruce Mitchell, Bobby(Tammy) Mitchell, Brent Mitchell, all of Camden, N.Y., Cindy(Wesley) Grider of Fort Mill, South Carolina, Vince(AnnaMarie) Donaldson of Oneida, N.Y., Bobby(M'Leah) Donaldson of Benton, and Philip Donaldson of Little Rock. Also surviving are 22 grandchildren, eight great-grandchildren, a sister Benita(Ben) Niciu, close cousins Mike Mitchell, Danny Mitchell, David Mitchell, Bernadette Schinn, and Karen Scales, all of Camden, N.Y., sister-in-law Marilyn DeMoss of Sheridan, as well as many other close relatives and friends.
He was predeceased by his parents, and two sisters, Colleen Houlihan and Monica Kowalski. Pallbearers will be Yohance Brunson, Lloyd Downen, Jerry Goodlow, Mike Mitchell, Danny Mitchell, David Mitchell, and Phil Rice.
Funeral services will be held Tuesday, June 8, 2021, 2 p.m., at Fuller Hale-South in Pine Bluff with Brother Todd Anderson officiating. Visitation will be at the funeral home, Monday, June 7, 2021, from 5-7 p.m. Interment will immediately follow at Lee Cemetery in Jefferson County. Arrangements by Ralph Robinson and Son.
Memorial gifts may be made to Summit Baptist Church, 901 Ridgway Road., Pine Bluff, Ark., 71603, or to the charity of your choice.
Online condolences at www.ralphrobinsonandson.com.