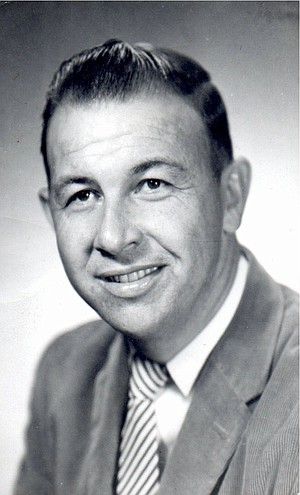 John Earl Stewart, Sr., 93, formerly of Gould, Ark., passed away on June 11, 2021. He was born February 13, 1928, to the late John Hiram Stewart and Grace Pearl Taylor (born Conley) in Fayette County, Tenn.
John spent his early working years with the United States Army Corp of Engineers as a land surveyor. After marrying an Arkansas girl and the love of his life, he settled in Gould to raise his family. He was employed with Arkansas Power and Light Company, later Entergy Arkansas, Inc., as a surveyor and retired as a Project Inspection Supervisor. He was a registered land surveyor and he farmed rice, soybeans, cotton, and corn.
After an early retirement due to health, John and Mayme traveled in their RV across the U.S. and Canada with the Cotton Pickers and Arkansas Travelers clubs. They especially enjoyed their trip to Alaska in their RV and overseas trips to Israel, Egypt, and Australia.
John was a lifelong member of the First United Methodist Church of Gould and was very active in his church.
He loved writing stories about his grandchildren, much to their chagrin, and sharing them with Charles Allbright, an Arkansas Traveler columnist of the Arkansas Democrat Gazette. Once after a lapse in communication, Mr. Allbright called to ensure John was alright. After confirming that he was okay, he told John to keep those stories coming.
John enjoyed deer hunting with his family and friends in Kingsland at the SWAYGO Hunting Club.
He was a devoted husband, father, grandfather, and great-grandfather, sharing his love with family and friends.
Left to cherish his memory are his children, John Stewart, Jr. (Tracy) of Little Rock, Bryan Stewart (Susan) of North Little Rock, and Jan Suitt (Cecil) of Conway; eleven grandchildren: Jill Kamps (David), Jamie Brainard (Ben), Virginia Terhar (Steve), Samuel Stewart (Christine), Elise Ward (Wes), Ashley Norris (Pete), Briana Allen (Nate), Brittany Makhanya (Khani), Kara Grace Lagree (Jordan), John Suitt (Brittney), and Celeste Suitt; twelve great-grandchildren: Grace and Leighton Kamps, John Holden and Miriam Brainard, Joey Terhar, Cora and Davis Ward, Hadley Stewart, Avery Suitt, LJ and Max Makhanya, Wilder Lagree; and his niece, Jeanne Hamby Howse (George).
John is preceded in death by his wife of 67 years, Mayme Craig Stewart; and his sister, Martha Hamby.
Visitation will be at Roller McNutt Funeral Home in Conway from 3 to 5 p.m. on Sunday, June 13, 2021. A graveside service will be held at 2 p.m. Tuesday, June 15, 2021, at Dark Corner Cemetery in Dumas. In lieu of flowers, donations can be made to Alzheimer's Arkansas, 201 Markham Center Drive, Little Rock, Ark., 72205.
Online guestbook: www.rollerfuneralhomes.com/conway