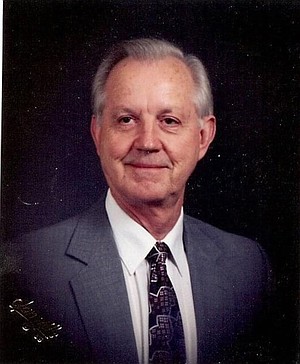 William (Bill) Carl Plummer, 91, of Plumerville, Ark., departed this life on March 18, 2021. He was born to Samuel Carl and Mabel Malone Plummer on September 24, 1929 in Plumerville, Arkansas.
Bill was a 1947 graduate of Plumerville High School. Then upon graduation, attended the University of Central Arkansas in Conway, Ark., where he graduated with a bachelor's degree in 1951. Upon receiving his degree, he taught high school English in Corning, Ark.
Bill enlisted in the U.S. Navy, where he served from 1952 to 1956, and he received many honors, including the National Defense Service Medal and Good Conduct Medal.
Upon his discharge from the Navy he taught school in Salinas, Calif., before coming back home to Plumerville.
Bill was a very social person and loved to be around people. He enjoyed attending football and basketball games, the theatre, and always wanted to go to Branson to see the shows and meet up with his family.
Bill was well liked and did so much for other people. He attended he Plumerville Senior Citizens for lunch and Senior Meals in Morrilton. He always enjoyed playing Bingo and Chicken Feet and of course catching up on others.
He was a faithful and loyal member of Plumerville Methodist Church, Mayor of Plumerville, a member of the American Institute of Floral Design, member of Arkansas Florist Association, where he held the title of President and also Secretary from 1966 to December 2020.
Bill was a Floral Business Owner and Operator and had many opportunities in his career. Plummer's Flowers was started in 1958 and he retired in December 1999. He was a part of decorating floats for the Rose Bowl Parade in California and floral arranging for President to be Bill Clinton at his inauguration in Washington D.C.
Bill was preceded in death by his parents; sister, LaRue Plummer Anderson; brother-in-law, Norman Ramon Anderson; niece, Ramona Gail Smith; and a great-nephew, Marty Edward White.
Survivors include three nieces: Marsha Stephenson of Oklahoma City, Jan Parker of Bethany, Maribeth White and husband Mark of Bethany; four great-nephews: Dr. Ted Smith and wife Nicole; Tim Smith of Dallas, Texas; Mitchell White of Oklahoma City; Montana White of Bethany; one great-niece: MaCaulie White of Oklahoma City; five great-great-nieces: Ceanna White of Oklahoma City; Sophia, Siena, Scarlett and Stella Smith of Dallas, Texas; a host of cousins, extended family, and many, many friends.
Public Visitation will be 3 to 5 p.m. Sunday, March 21, at Harris Funeral Home.
Funeral services will be 2 p.m. Monday, March 22 at Plummerville United Methodist Church. Interment will follow at Plummerville Cemetery where he will be celebrated with military honors.
Bill's family would like to thank everyone for their prayers, love, support, visits, phone calls, and cards to him during the past few months. Your prayers have kept us going. Thank you!
Arrangements are by Harris Funeral Home of Morrilton. Online guestbook: www.harrisfuneralhomes.net