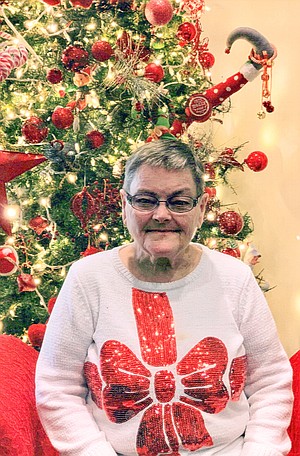 Barbara Jean Sandell, age 77, passed away Thursday, April 8, 2021 in Bentonville, Ark. She was born August 11, 1943 in Fond Du Lac, Wis., to George and Betty (Dorr) Soper. She is preceded in death by her loving husband, Sandy Conrad Sandell.
Barbara spent her childhood in Bloomington, Ill., and graduated for the local high school. While living in Evansville, Ill., she met her husband while she was a passenger on his bus route. After the couple married, they moved to Houston, Texas and welcomed two sons to their family: William and Dirk. After the sudden death of her husband, she lived in Missouri for a short time until she eventually settled in Northwest Arkansas to be close to her father. She became an active member in the community for the 20 years she spent in NWA. She was a devout member of Central United Methodist Church of Bentonville. She enjoyed going to the Bentonville Farmers Market and made special connections with many vendors throughout the years. In her spare time, she enjoyed knitting and crocheting different gifts for people in her community with the company of her two beloved cats. She had a special gift to connect with people and will be missed by many friends she met along the way.
She is survived by her children, William Sandell of Chillicothe, Ohio, Dirk Sandell of Osage Beach, Mo.; brother, Bill Soper and wife Carolyn of Northbrook, Ill.; cousins, Mary Mehn of Gainesville, Fla., Judy Zabriskie of Monona, Wis.; and her close friend, Cindy Walters.
Cremation arrangements have been entrusted in the care of Nelson-Berna Funeral Home in Rogers.
To place an online tribute, please visit www.bernafuneralhomes.com