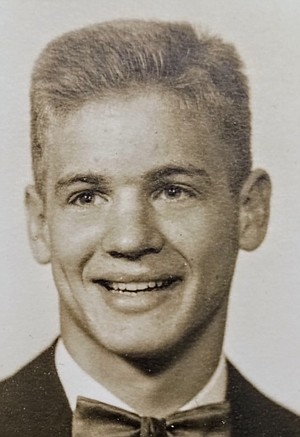 George Ewing Pike, Jr., of Little Rock, died October 11, 2021, at the age of 84. He was born on September 13, 1937, and grew up in DeWitt, Arkansas. He graduated from Hendrix College in 1959 and Harvard Law School in 1962. George served in the U.S. Army National Guard from 1955-1961. He practiced at the law firm Friday, Eldredge & Clark for 29 years before entering solo practice. In 1985, he was inducted into the American College of Trial Lawyers. George loved the practice of law and helping people. He will be remembered for his kindness, his generosity and most of all his sense of humor.
He was proud of his "six wonderful daughters" and loved having his family gathered. George always spent as much time as he could outdoors. He appreciated and studied his natural environment. By example, he taught his daughters and grandchildren to be curious, to look for answers, and to believe that they could do anything. He was an avid reader of history and a lifelong learner. George will be greatly missed by his family and friends.
He is survived by his wife of 59 years, Jean Ray Pike, and daughters, Laurie Osborn (Bill), Sheri McCoy (Steve), Rebecca Lucy (Walter), Deborah Bliss (Jack), Anna Hubbard (John Paul), and Sophie Pike; seven grandchildren, Nick Osborn, Carder McCoy, Megan Sonnamaker (Colton), Chase McCoy, Adam Bliss, Jason Bliss and Alexis Lucy; and three great-grandchildren, Paxton and Hadley Sonnamaker and Emerson Holloway; and his brother, Dr. John Pike (Vaughn). He is predeceased by his parents, George E. Pike, Sr. and Winnie S. Pike, and his grandson, George Mitchell "Mitch" McCoy.
In lieu of flowers, the family would appreciate donations to The Nature Conservancy, preserve.nature.org, the Juvenile Diabetes Research Foundation, jdrf.org, or the library of your choosing. A service will be held at the Smith North Little Rock Funeral Home, 1921 Main Street, North Little Rock, on Thursday, October 14, 2021, at 4 p.m. The family asks that all visitors wear masks. Online guestbook: www.SmithFamilyCares.com