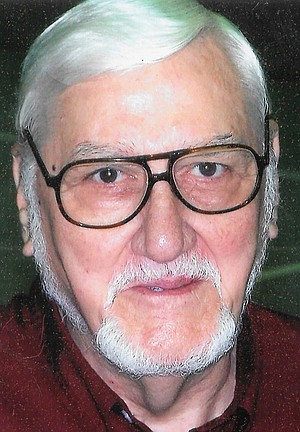 Herbert Edgar Owen, 92, of Pine Bluff, died October 9, 2021. He was born March 20, 1929, at Glendale, Ark., to the late Otto and Mary Will Smith Owen. He graduated from Glendale High School where he played basketball. Growing up during the Depression, he learned the value of hard work, thriftiness, and to love the Lord.
He began his career as a butcher shortly after graduation. He worked all over southeast Arkansas for Kroger and Piggy Wiggly, and locally for Paul Green, Austin Franks, and Cecil Gibbons. In 1963, he bought his own store at 14th and Texas Streets in Pine Bluff, which he ran until the mid-1970s. He also worked as an agent for Jefferson County Extension Service and later taught Meat Processing at Pines Vo-Tech.
He served in the Army during the Korean War.
He was a member of First Immanuel Missionary Baptist Church. He was a 32nd degree Scottish Rite Mason. Herbert was a member of Jacob Brump Lodge #160, F.& A.M. and served as Worshipful Master in 1968.
He married Vivian Oneita Cooper on June 30, 1950. She passed away in 2003 shortly before their 53rd wedding anniversary.
He was also preceded in death by his sisters, Hellon Ballew, Carrie Mae McClinton, Pebble Watt, Martha Lou Mayfield, Evelyn Johnston, and Maxine Woolley; and his brothers, James Owen and Victor Owen.
He is survived by his sisters, Eula Faye Hestand of Paragould, Joyce McFalls of Pine Bluff, and Virginia Gillespie of Star City; his daughter, Wanda Akines (Danny) of White Hall; his son, Herbert Owen, Jr. (Stephanie) of Woodbury, Minn.; seven grandchildren; 17 great-grandchildren; two great-great-grandsons; and a host of nieces and nephews who will miss him greatly.
The funeral service will be held at First Immanuel Missionary Baptist Church on Saturday, October 16,, 2021, 2 p.m., with Brother Robert Cossey officiating. Visitation will be at the church one hour prior to the funeral. Due to COVID, masks are required. Interment will follow at Shady Grove Cemetery at Glendale by Fuller Hale-South Funeral Services.
In lieu of flowers, the family requests that memorials be made to either St. Jude Children's Research Hospital or Arkansas Children's Hospital.
Those unable to attend can view the funeral service through the live stream link at FullerHaleSouth.com. You can also send a condolence online at FullerHaleSouth.com