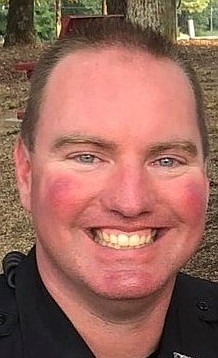 Christopher William Cummins, 38, went to be with the Lord on Saturday, October 23, 2021. He was surrounded by his family after a lengthy hospital stay. Christopher was born on August 15, 1983, to Gary and Leann (Cheek) Cummins.
Chris was raised and educated in Owasso, Okla. He graduated from Owasso High School in 2002. He was a member of the Pride of Owasso Marching Band Drumline. He loved playing all types of drums and percussion instruments. After graduating, Chris received his Associates Degree at Tulsa Community College. He went on to attend University of Central Oklahoma. Chris received his bachelor's degree in Criminal Justice at Central Christian College in McPherson, Kansas, where he graduated Summa Cum Laude. Christopher wanted to be a police officer his entire life. He graduated from Council on Law Enforcement Education Training class A1001 on April 8, 2010. His dream had come true! He was a Commissioned Law Enforcement Officer. He was employed with Police Departments in Kellyville, Oklahoma, Parsons, Kansas and Centerton, Arkansas. Chris was currently employed with the Bella Vista, Arkansas Police Department, where he was a patrol officer and member of the SWAT team.
Christopher was a lifelong member of the Owasso Church of the Nazarene and currently attended Life Church in Rogers, Ark. Christopher loved playing baseball and football, fly fishing with his dad, and cheering on the OU Sooners.
Chris was a friend to everyone he met. He never met a stranger and valued connections. His passion was to serve and protect his community and he did that every day of his life.
The love he had for his family was constant, fierce and endless. Chris was ever present and always helping his children during each milestone they experienced and offered them the best advice and direction. His family was everything to him and he was so grateful. He mentioned, almost daily, how much he loved them and how thankful he was for them. Chris and Ashley's love story was cut far too short, ended sooner than anyone expected. Ashley was the love of his life and he made sure she knew it every day and that she was able to give him the family he always longed for. God knew what he was doing when he brought them together - he blended together a family that has been forever changed.
Christopher is survived by his parents; fiancee, Ashley McCarthy; son, Michael McCarthy; daughters, Makenlie McCarthy and Shalee Autry (Raz), all of Bella Vista, Ark.; grandparents, Bill Cummins of Dewey, Okla., and Peggy Cheek of Owasso, Okla.,; countless aunts, uncles and cousins that he loved deeply.
Funeral services will be on Friday, October 29th at 11 a.m. at Cross Church in Rogers, Ark. Memorial service will be Saturday, October 30th at 2 p.m. at Friendship Baptist Church in Owasso, Okla. Condolences may be expressed at www.funeralmation.com.