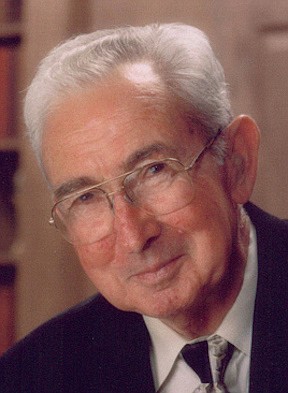 Gene Warren Miller, also lovingly known as "Poppy" was born on November 15, 1924, and died on August 30, 2021. Gene was the third child born to Dratie Alexander and Mary Mae Bush Miller and born in the Holly Grove community. Gene attended Holly Grove Public Schools. When he was in the fifth grade, his teacher thought that he was not challenged enough, so she moved him up to his older brother's sixth grade class. He went on to graduate in 1941, from Holly Grove as Valedictorian of his class. Gene went to Arkansas State University for one year and came back to help on the farm with his daddy. He enlisted in the United States Air Force during World War II after the bombing of Pearl harbor. He went into the Air Force on December 23, 1943, and attended Radar and Radio School while in the Air Force. After the war, Gene enrolled at the University of Arkansas in Fayetteville. He graduated and received his Bachelors of Science in Agricultural Engineering. He received the first Agricultural Engineering degree ever conferred by the U of A in 1950. The University honored Gene for this distinction in 2000. He was given the honor of giving his granddaughter, Lindsay Miller Hennarichs, her Master's in Education diploma during her graduation ceremony.
Upon graduating from the U of A, Gene began farming again with his daddy. After farming for several years, he met his future wife, Florine Holloway of Brasfield. Gene and Flo married February 3, 1952. Gene and Flo have been faithful members of the Holly Grove Presbyterian Church, where Gene was raised. Gene was a Sunday School teacher and Elder. As an adult, he joined the Masonic Lodge and as a youth he was a boy scout. Gene loved God, his family, and farming. Once a farmer, always a farmer. He still enjoyed riding and looking at all the crops until recently. Gene and his brother, Frank farmed as the Miller Brothers and were honored in October 2019, at the Arkansas State Capitol by Arkansas Farm Bureau for being a farming family for one hundred and seventy-two years. Gene loved all sports, especially his Razorbacks and St. Louis Cardinals. Gene had the privilege of watching the St. Louis Cardinals at all three of their stadiums during his lifetime.
Gene is survived by his wife, Flo, sons: Warren Miller (Kathy) of Tulsa, Okla., Tommy Miller (Carolyn) of Holly Grove, and Doug Miller (Beverly) of Rogers, Ark., daughters: Cindy Endsley of Holly Grove, Cathy Kirkpatrick (Philip) of North Little Rock, Ark., grandchildren: Lindsay Miller Hennarichs (Kyle) of Springdale, Ark., Derek Miller of Holly Grove, Reagan Miller of (Lacey) of Little Rock, Wayne Endsley (Tiffany) of Holly Grove, Kevin Endsley (Leah) of Dewitt, Ark., granddaughters: Stephanie Miller Carrigan (Marc) of Springfield, Mo., Stacey Miller Feagans (Brandon) of Cincinnati, Ohio, Kristine Elam (Brian) of Cabot, Ark., brothers, Rodney Miller of Cave Springs, Ark., Frank Miller (Jenny) of Holly Grove; Charles Miller (JoAnn) of Salem, Ark., sisters: Pat Benz (Ray) of Little Rock, Gay Van Vleck of Mountain Home, Ark.; Peggy Evans of Marianna, Ark., sister-in-law, Carolyn Banks Miller, of Fredericksburg, Va.; nineteen great-grandchildren and special friend, Queen Bailey, of Clarendon.
Gene was predeceased by his parents, D.A. Miller, Sr., and Mary Mae Miller; his brothers; Dratie, Jimmy and D.A. Miller, Jr., sisters; Mary Miller Seaborn and Ruth Miller Mooney and son-in-law, Marlon Endsley.
Memorials can be made to: Holly Grove Presbyterian Church C/O Jean Kirkpatrick, 51 Kirkpatrick Lane, Holly Grove, Ark., 72069. Services 11 a.m., September 3, Holly Grove Presbyterian Church for family and church members. Burial 12 p.m., Macedonia Cemetery, with visitation following at the Presbyterian Educational Building in Holly Grove at 1. Guestbook obit: www.bobnealandsons.com