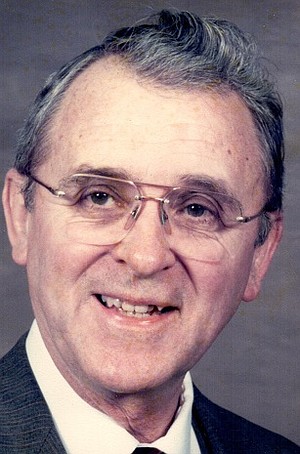 Fred Bruce Murphy, age 93, passed away on September 13, 2021. He was born in El Dorado to Marjorie and Fred Murphy, June 13, 1928.
To cherish his memories are his wife of 70 years, June Maxine Murphy; and five children, Bruce (Teresa) Fred (Leanne), Tim (Rita), and Todd Murphy and Tammy Murphy Jones (Steve).
He married June McMahan in 1952 then set about to become a theologian, pastor and role model parent raising five children. The relationship between Bruce and June was a partnership to bring God's will to the lives of their congregations, communities and children. They succeeded and conducted a dual leadership family.
He was chosen by God to be a man of God at a young age and graduated from Ouachita Baptist College in 1951, Fuller Theological seminary in 1956 and Southwestern Theological seminary in 1958. He then devoted the rest of his life to collecting and healing souls for Jesus. His ministries were in small rural Arkansas communities where he had huge impacts on growing, building or improving churches.
The churches he pastored were in Huttig, Ark. (1958-1965), Stephens, Ark. (1965-1970) and El Dorado Second Baptist Church (1970-1993). He continued to be interim pastor at churches throughout south Arkansas including Strong, Huttig, El Dorado, Stephens, and preached by invitation at innumerable other locations.
His preaching style was welcoming, full of comedy and laughs, but then focused on explicating the gospel by directly personally translating form the original biblical manuscripts. A fluent reader and translator of ancient Greek and Hebrew, his congregations were treated to a style that left no chance for not understanding exactly what God through the author intended. He fervently believed that your head should be in the Word of God every day and you should commit to memory the verses so impactful to your situation. He memorized thousands of verses and in many cases could recite entire chapters of the bible. He took his message to the mission field with trips to Africa and Russia at a time when foreign missionaries were not welcome.
Fred Bruce Murphy's biggest hobby was full time enjoyment of his kids, grandchildren, great grandchildren of which he was hugely successful. His direct family includes 45 descendants, who have been meeting every Sunday morning digitally on Zoom for the last 72 Sundays. He was a brilliant role model patriarch and preached at these meeting to his family including those from newborn to 88 years. His messages about "The Son of man" and "The Word was God" touched everyone during the pandemic. He closed every message with the words, "Amen, amen and I need to hear it one more time, amen"
There will be a visitation from 10:00 am then a celebration service at 11:00 am on Thursday September 16, 2021, at Ebenezer Baptist Church (masks are encouraged). A family burial will follow under the direction of Young's Funeral Directors. Condolences may be expressed online at www.youngsfuneralhome.com