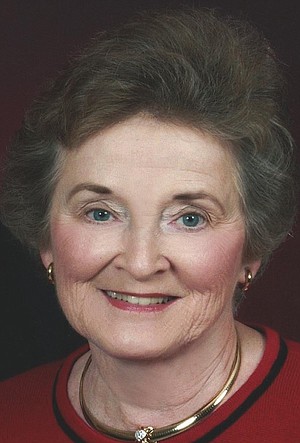 Roberta Anne Gill, 84, a treasured member of the Dumas, Arkansas, community passed away on Saturday, September 11, 2021. Bobbye, as she was affectionately known to family and friends, was remarkably dignified and sound in faith, love, and steadfastness. She remained vigilant to the end in her conviction that life is to be lived for a higher cause than self interest, and her influence will be felt for many years to come. Bobbye was born on October 25, 1936, in Salem, West Virginia, to the late Alger Page Lockard and Mary Jarvis Lockard. After graduating from Grafton High School in 1953, she enrolled in Salem College, now known as Salem University. Shortly thereafter, Bobbye and her family relocated to Washington, D.C., where she worked at the U.S. Department of Agriculture. It was there Bobbye met her future husband, Marion Gill, who was working at the Pentagon in intelligence at the time. Their marriage was a lasting success spanning sixty-two years from 1956 until his death in 2018.
Bobbye and Marion moved to Dumas, in 1959 after he graduated from law school, and she worked at Gill Law Firm as a secretary and office manager for many years with her husband, son, and daughter-in-law. Despite being immersed in an environment ripe with lawyers where time was viewed as the most valuable resource, Bobbye consistently gave freely of hers, investing countless hours in her family, friends, and the community throughout her life. In her younger days, she had an almost superhuman capacity for work, which she channeled into acts of service for others. Bobbye was a passionate cook and she spent a great deal of time in the kitchen preparing delectable meals for loved ones and neighbors. She would frequently send her grandchildren home from a visit with an ice chest full of their favorite foods and maybe some of their not-so-favorite foods, too. They will fondly remember her persistence and zeal to break them of their picky eating habits with her favorite catchphrase: "If you try it, you might like it." She was selfless to a fault, and her hospitality extended far beyond the four walls of the Gill homestead. Even as a guest in someone else's home, she would busy herself with cooking, cleaning, and ironing anything to offer a helping hand.
As a devout Christian and a member of the First Baptist Church in Dumas, she lived by the tenets of her faith: feed the hungry, visit the sick, donate to charity. She was an active member in many of the church's outreach efforts, and it was not uncommon for her to deliver homegrown roses to an elderly friend, coordinate a community meal train, or purchase, wrap, and deliver toys for struggling families to gift their children on Christmas morning. Children's ministry was of enduring importance to her: She taught Sunday school classes for three and four year olds for more than fifty years, and she was pivotal in founding Wee Care Child Development, a child care center in Dumas. Following its opening, she was dedicated to ensuring that every child who crossed the threshold was safe, healthy, and happy, frequently stepping in as a substitute teacher and even serving multiple stints as the program director.
Bobbye was a social person with a large circle of friends, and she maintained a lively interest in fishing, sewing, and gardening, but perhaps her greatest pleasure late in life was spending time with her great-grandchildren. She was the quintessential champion of those she loved, offering compassion, support, and encouragement no matter the circumstances. In addition to her giving heart, she will be remembered for her unwavering resilience and perseverance. Despite her ailing health and the unexpected loss of her husband, Bobbye never stopped fighting. Instead, with each challenge, she chose to regroup and move forward with peaceful, generous determination grounded in her limitless faith. Bobbye's passing is a great loss to her family and friends, but they take comfort in knowing that Marion and Bobbye are together again and that she will enjoy the eternal life she so clearly deserves. She was greatly loved and will be dearly missed.
Bobbye was preceded in death by her loving husband of sixty-two years, Marion Sherman Gill, and her parents, Alger Page Lockard and Mary Jarvis Lockard. She is survived by one son, Brooks Alan Gill, of Dumas, Arkansas; one daughter, Susan Paige Fegraeus, and husband, Kurt, of Plano, Texas; one grandson, Brooks Page Gill, and wife, Ashley, of Bryant, Arkansas; three granddaughters, Caroline Gill Pennington, and husband, David, of Arkadelphia, Arkansas, Kelsey Elaine Wade, and husband, Jordan, of Plano, Texas, and Kendall Anne Fegraeus, of Plano, Texas; three great-grandchildren, Marion Beckett Gill, Hannah Paige Wade, and James Alan Pennington; one sister, Rebecca Chocco, of Hernando, Florida; two brothers, Sam Lockard, and Linda Smith, of Dover, Delaware, and Bill Lockard, and wife, Lynn, of Loudon, Tennessee; and many beloved nieces and nephews.
A funeral service to celebrate Bobbye's life will be held at First Baptist Church on Friday, September 17, 2021, at 1 p.m. In lieu of flowers, the family requests memorial donations be made to the First Baptist Church, 200 E. Waterman Street, Dumas, Arkansas, 71639. Arrangements by Griffin Funeral Home, Dumas, Ark., 71639. Please sign online guestbook: www.griffinfh.com