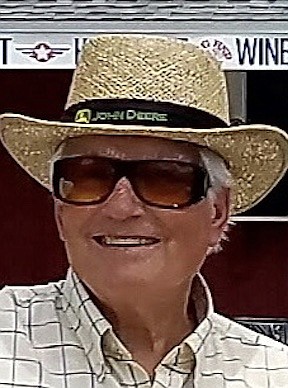 On September 12, 2021, Wayne L. Marcotte, 81, ended an almost two-decade battle with cancer. Wayne was born in Red Lake Falls, Minnesota, January 26, 1940, to Harry and Marie Marcott as one of eight children. He attended public schools in Red Lake Falls where he was active in football, basketball, and hockey, which led to his life-long love of sports. Even though his beloved Razorbacks often disappointed him, he cheered for them through the good and the bad never giving up on them. He was also a devout outdoorsman and preferred anything outdoors to being inside. He enjoyed fishing, hunting, especially deer hunting with his grandsons. Wayne was an avid gardener and spent many hours every summer growing vegetables to feed his family and friends. He never met a vegetable that he couldn't grow. To all who met him they could quickly tell that he was a master wood-worker. If you could make it from wood, he could make it. Over the decades he built everything from toys to buildings using the skills he honed through-out the years. Wayne also had a permanent oval track in his head for only left turns as he was a die-hard NASCAR fan and had followed Mark Martin's entire career.
After graduating high school, he joined the United States Air Force and was stationed in Shreveport, La., Newfoundland, and Salina, Kan. Before he reported to Barksdale AFB, in Shreveport, he returned back home to marry his high school sweetheart Arlene Thode on June 17th 1961. They were blessed with three children, Cheryl, Ronald, and Julie, but suffered a heart-breaking loss when their son passed shortly after birth. Once his active-duty service ended, Wayne then worked as a contractor in Wichita Falls, Texas, and at Little Rock Air Force Base, working with vehicle maintenance units. After working as a contractor, he transitioned through several other jobs until he achieved his dream of starting his own axle company. He founded ARMO axle company in Beebe in 1991. He led the company for many successful years until he sold the company to retire. Not a man to sit at home, shortly after retirement he took a job at North Point Ford delivering and ordering parts at their body shop. He was known by many nick names over the years including, The Cranky Yankee, and the rain maker, which was a nickname he picked up after having knee surgery because of a motorcycle accident. He could predict the weather better than most local weather forecasters. His family is so grateful that we got to celebrate the milestones of his 80th birthday, their 60th wedding anniversary, and wife's 80th birthday with him.
Wayne was an active and long-time member of Hope Lutheran Church in Jacksonville and spent many days mowing the grass and helping with other projects.
Wayne was preceded in death by his parents, Harry and Marie Marcott, sister, Mae and brother-in-law Walter Morgan, brother-in-law, Albert Erdmann, sister-in-law, Betty Marcott, son, Ronald Wayne Marcotte and granddaughter, Lauren Reeves. Wayne is survived by his wife, Arlene, daughters, Cheryl Bajorek (Rob), Julie Reeves (David), grandsons, Michael, Chris, and Matthew, as well as his sisters and brothers.
Services will be held Thursday, September 16, 2021, at 11 a.m., at Hope Lutheran Church, 1904 McArthur Drive, Jacksonville, Ark., 72076. Burial to follow at Mt Carmel Cemetery in Cabot. Arrangements entrusted to A Natural State Funeral Service, 2620 West Main Street, Jacksonville, Ark., 72076, 501-982-3400. Online guestbook available at: www.anaturalstatefuneralservice.com