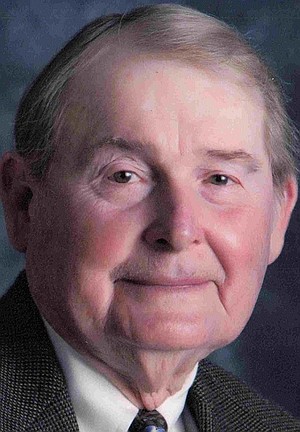 Bobby Dan Small went to be with his Lord and Savior on Saturday, September 18, 2021, at the age of 88. Bob was born in Calmer, Ark., on March 14, 1933, to F.L "Buck" and Lyda (Reed) Small. He was the youngest son, with four brothers and one sister.
In 1951, he graduated from Woodlawn High School, where he met his soon-to-be wife, Jo Fern McClain. Soon after marrying Jo in 1953, Bob joined the United States Air Force. After being based in Florida, Texas, and Japan, he left the Air Force in 1957 as a First Class Airman. His favorite memory from service was flying evangelist Billy Graham to Japan.
Bob returned home to Pine Bluff and opened Bob Small Florist Inc. in 1958. At one time during his floral career, he managed four store locations across Southeast Arkansas and served as the President of Arkansas Teleflora Association. After 40 years in business, Bob retired in 1998 and passed management of Small Florist to his son, Michael.
In retirement, Bob enjoyed working in his yard, as well as repairing and reselling cars, tractors, and anything else with an engine. Bob loved the Lord and was a Charter Member and Trustee of Summit Baptist Church, where he sang in the choir every Sunday. He was also a member of The Gideons International. Bob loved his family and friends, leaving a legacy of kindness and support.
Bob was proceeded in death by his son, William Mark Small; his mother, Lyda (Reed) Small; his father, F.L. "Buck" Small; his brothers, James Small, Allie Small, Charles (Jo) Small, and Leonard (Nanny Jo) Small; and his grandson, Ethan Small.
Those left to cherish his memory are his wife, Jo of Pine Bluff, Ark.; his son, Michael (Patricia) Small of Pine Bluff, Ark.; his sister, Margaret (Small) Austin of Bryant, Ark., his grandson, Alex Michael Small of Dallas, Texas; and numerous nieces and nephews.
Visitation will be held Wednesday, September 22, 2021, at 10 a.m. in the Chapel of Ralph Robinson and Son. The funeral will follow at 11 a.m., with Brother Todd Anderson officiating. He will be laid to rest at Roselawn Cemetery.
Memorials may be made to Summit Baptist Church, 901 Ridgway Road, Pine Bluff, Ark. 71603. Online register: www.RalphRobinsonandSon.com