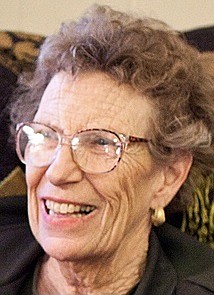 Dr. Jane L. Treat (nee Reta Jane Littlejohn), 84, of Fayetteville, died September 19, 2021 at Avenir Memory Care after a long journey with dementia. She was born May 17, 1937, in Ada, Okla., the daughter of Lewis Cornelius and Jewell Taylor Littlejohn, and stepfather, Thomas Espa Harrison. She was preceded in death by her husband, Ralph Treat; and her parents.
She was married to Larry Greathouse, and they had two daughters. In
1975, she married Ralph A. Treat to have a combined family of seven children.
She was valedictorian of her high school class in Alamogordo, N.M. She received a BA in accounting from Eastern New Mexico University, Master of Arts in teaching from New Mexico State University, and a Doctorate of Education from the University of Arkansas.
She was a fierce advocate for women's rights and was involved in the Arkansas Federation for Business & Professional Women (state president 1988-1989 and Arkansas Business Woman of the Year in 1983). She strongly believed in giving back to the community. She was a member of the Fayetteville Lions Club (President, District Governor), Daughters of the American Revolution (Regent 1986-1988, State Parliamentarian 1984-1986), National Association of Parliamentarians (organizing secretary in Arkansas). She was an active member for 52 years at Central United Methodist Church. She was a huge proponent of education and longtime member of Kappa Kappa Iota – a professional sorority for teachers (State President, National President 1984-1985) and a member of Delta Kappa Gamma. She was a school teacher 1960-1967 in New Mexico public schools.
After receiving her Doctorate in 1976 she worked in the Office of Research & Sponsored Programs (retiring as Assistant Director). She worked at the University of Arkansas for 23 years.
In their retirement years Jane and Ralph were heavily involved in Lions Club, volunteering with Midsouth Sight & Hearing, Lions Diabetes and Awareness Center, World Services for the Blind. They loved eating out and frequented La Hacienda and Tim's Pizza East FREQUENTLY!
As Jane's memory declined, Ralph was truly her best friend, supporting her in all sorts of activities and caring for her at home.
When Ralph passed away in 2014, Jane went to Avenir where she lived until her death. The entire family is so appreciative of the love and care Avenir provided for their coffee loving resident.
She is survived by five daughters, Alena Treat (Liz Hicks) of Des Moines, Iowa, Loree Treat of McKinney, Texas, Candice Treat Murphy (Mark) of Little Rock, Ark., Linda Greathouse Walsh of Omaha, Neb., and Tammy Greathouse Smith (Tom) of Fayetteville, Ark.; two sons, Randy Treat (Debbie) of Jenks, Okla., and Tony Treat (Janice) of Charlotte, N.C.; a sister Betty Lou Harp of North Little Rock, Ark.; 12 grandchildren: Jerah Boyd, Tabitha Murphy, Ryan Treat, Joe Moulden, Justin Moulden, Ross Murphy, Paige Murphy, Zachary Walsh, Nick Walsh, Harrison Smith, Julia Smith and Mason Smith; and nine great-grandchildren.
Graveside service will be 3 p.m., Wednesday, September 22, 2021, at Fairview Memorial Gardens in Fayetteville under the direction of Moore's Chapel.
Memorials may be made to Central United Methodist Church, P.O. Box 1106, Fayetteville, Ark. 72702, or Fayetteville Lions Club, P.O. Box 4582, Fayetteville, Ark. 72702.
To sign the online guest book, visit www.bernafuneralhomes.com