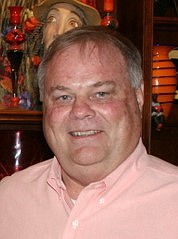 Charles W. "Wimpy" Norton, Jr. was born on June 27, 1948, in Pine Bluff, Ark., a city he loved and supported. He passed away on September 20, 2021, after a difficult struggle with a rare neurological condition that slowly robbed him of his gift of speaking and storytelling. He leaves behind his two sons, Hunter (Courtney) and Winfrey; his longtime partner, Phyllis Wright; his brother, Mac (Susan); granddaughter, Lawson; grandson, Nash; niece, Kathryn; nephew, Rhine (Destin); and great-niece, Abigale. He was preceded in death by his parents, Wilma Jane and Charles Winfrey Norton, Sr.; and his brother, James Norton.
Wimpy graduated from Pine Bluff High School in 1966, where he was a letterman on the Zebra football team. He graduated from Hendrix College in 1971. After college, he returned to Pine Bluff and began a long career in selling and developing real estate. He was a lifelong resident of Pine Bluff, pouring much of his time and energy into his hometown. Wimpy was also a member of First Presbyterian Church, where he faithfully served in many roles over the years, including Sunday school teacher, youth leader, deacon, elder, and kitchen helper. He was an advocate for Pine Bluff public schools and coached numerous youth sports teams, often going beyond the call of duty by providing transportation for kids to and from practice and games whenever their parents were unable to do so. Wimpy loved helping people with "projects" and always put others' needs before his own. He was a loyal friend to many.
Wimpy loved duck hunting and the Arkansas Razorbacks. Many times in the duck woods, his friends and family would have to remind him to quit talking and pull the trigger. He was there more for the camaraderie and socializing than he was for killing ducks. He was a lifetime sponsor of Ducks Unlimited. He loved taking his family to Razorback games and traveling with friends to watch the Hogs play in the SWC and SEC basketball tournaments.
A memorial service will be 10:30 a.m., Friday, September 24, 2021, at First Presbyterian Church with Reverend John Landis officiating by Ralph Robinson and Son Funeral Directors. A reception will follow the service at the church. The family has requested a mask requirement at the church for the service and reception. Burial will be private.
In the continued spirit of striving to help others, Wimpy donated his brain to research. Memorials may be made to The Wimpy Norton Scholarship, Hendrix College, Office of Advancement, 1600 Washington Ave., Conway, Ark. 72032 or First Presbyterian Church, 717 West 32nd Ave, Pine Bluff, Ark. 71603. Online register and livestream: www.RalphRobinsonandSon.com