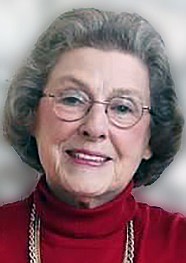 Frances Welch Farrell died peacefully on September 17, 2021 at Legacy Nursing Home in Tallulah, Louisiana. She was born in Searcy, Ark., on December 19, 1921, to Fredric Byron Welch and Marguerite Morgan Welch. She grew up in Searcy and attended Harding College there. She also attended the University of Arkansas, where she was a member of Chi Omega Fraternity. After graduation from college, she moved to Brinkley, Ark., to teach home economics at Brinkley High School. Not long after moving to Brinkley, Frances met Paul Marion Farrell, and they were married on November 27, 1945 in Searcy. After their marriage, she retired from teaching and became an active member of the Brinkley community and St. John the Baptist Catholic Church, where she served as choir director for over 25 years.
Frances loved the Arkansas Razorbacks, good music, playing bridge with her friends, and making beautiful flower arrangements. But more than anything else, she loved her family, and there are many fond memories of family gatherings both big and small.
Frances was preceded in death by her parents; her stepfather, Greenwood C. Booth; her husband, Paul Farrell; her son, Paul Farrell, Jr.; two brothers, Fredric Welch and Morgan Welch; and two stepsisters, Mary Catherine Booth Compton and Gene Booth Pierce.
She is survived by two sons and their wives, Fred Farrell (Kay) of Vicksburg, Miss., and James P. "Jake" Farrell (Julie) of Germantown, Tenn.; grandchildren John Farrell (April), Ann Farrell Roberson (Marion), Matt Farrell (Alley), Katie Farrell Williams (Lawson), Patrick Farrell (Sarah), Allison Farrell Callahan (Jon), Ryan Farrell (Wendy), Meghan Farrell, Caroline Farrell; and 20 great-grandchildren; along with numerous nieces and nephews.
Mass of Christian Burial will be celebrated at 1:00 on Friday, September 24, at St. John the Baptist Catholic Church in Brinkley, Ark. Visitation will be from 11:00 to 12:00 in the parish hall.