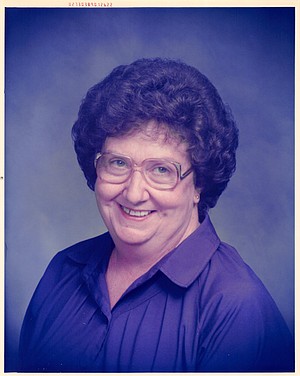 EARLINE ARCHER WAY, 93 of Little Rock, passed peacefully into Heaven on Saturday, September 25, 2021. She was born July 26, 1928 in Poyen, Ark., the daughter of Earl and Zelma Archer. Earline was preceded in death by her parents and sister, Catheline Heiss. She is survived by her husband (and high school sweetheart) of 74 years, Darrel Way; son, Gary Way (Debbie) of Mountain Home; daughters, Glenda Way Scott (Douglas) and Gayle Way Quattlebaum (Allen) both of Little Rock, grand and great-grandchildren and nieces, whom she loved dearly, and Rachel Campbell, her caregiver who cared for her so lovingly and made her laugh. Earline always had a sweet smile and warm heart for those she met.
Earline was a 1946 graduate of Carlisle High School and enjoyed attending reunions through the years with fellow classmates. She went onto Arkansas State University with a 1954 degree in education, followed by her Masters of Education. She was a member of the Delta Kappa Gamma sorority and Little Rock chapter of the Retired Teachers Association where she was president in 2002-2004.
Earline dedicated her life to her family and the children of others as a devoted elementary school teacher. She was an active member of the Friendship Class at Saint Luke Methodist Church in Little Rock and in latter years became a member, once again, of Carlisle First United Methodist Church. She was an avid traveler, visiting all 50 states with Darrel by her side. The two of them were also big Razorback and
ASU Indians (Red Wolves) fans, as they watched the games together at the fields or on television.
Visitation will be at 10 a.m., Wednesday, September 29, 2021 at Carlisle First United Methodist Church with services following at 11 a.m. Burial will follow in Carlisle Cemetery. In Lieu of flowers, donations to the Arkansas Alzheimer's Association would be welcomed.
Arrangements by Boyd Funeral Home, Lonoke. Online guestbook, www.boydfuneralhome.net.