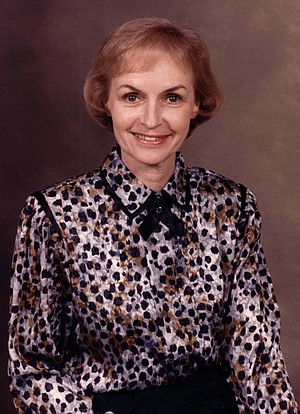 Marianne Thines Higgins Young died Sunday, September 19, 2021, at her home on Petit Jean Mountain, Ark. Born October 31, 1930, in Morrilton, daughter of the late John Pierre and Clara Schneider Thines, Marianne graduated from Sacred Heart School in 1947, and Loyola University of the South, New Orleans, in 1951. She was the widow of James Kent Young of Russellville. A retired Federal employee, Marianne had worked 30 years for the Social Security Administration in Pine Bluff and Russellville.
She is survived by her children, Ann Higgins Costa and her husband Fernando of Fort Worth, Texas, Donald Higgins, Jr., and his wife Janie of Petit Jean Mountain, Susan Higgins Carver and her husband Robert of Austin, Texas, and Elizabeth Young Gill and her husband Craig of Jackson, Miss. Marianne is also survived by her sister, Jean Thines Hutchison of Morrilton; and many grandchildren, great-grandchildren, nieces and nephews. She was preceded in death by her first husband, Donald Higgins, Sr., of New Orleans.
A lifelong Catholic, Marianne was a member of St. Elizabeth Church, Oppelo.
Services will be Tuesday, October 5, at 9:30 a.m.; there will be a Rosary held at St. Elizabeth Catholic Church in Oppelo following with visitation from 9:45 until 10:30, with funeral mass at 10:30 at the church. Arrangements are pending and will be posted via Rosewood Cremation & Funeral, 438 Hwy 64 E. Conway, Ark., 72032 and 301 E. Broadway Morrilton, Ark., 72110. www.rosewoodcremation.com.