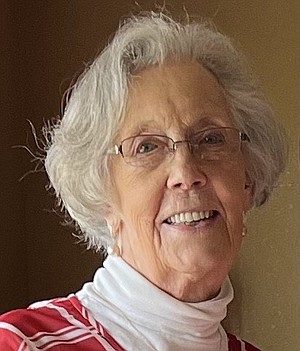 Fern Nicholson, 92, of Diamond City, passed away Monday, August 8, 2022, at Hillcrest Home in Harrison. She was born March 7, 1930, at PD Flat (Newton County), the first child of Guy and Martha Nixon Raulston. She was raised in Newton, Baxter, and Boone Counties, along with three sisters, Faye (Crowell), Patty (Frederick) and Carolyn (Jones), and a brother, JB. The family was always short on financial means, but long on love, staying tight-knit, even until today. Their father, Guy was mayor of Harrison when he died in 1957. Fern married the love of her life, Jim Nicholson, on Christmas Day, 1949. What an adventure they had, first traveling the country on a shoestring, then traveling the world when things got easier.
Fern had a long and illustrious career as a court reporter, working for three circuit judges and a federal bankruptcy judge. She and the judges took court to a six-county circuit in north central Arkansas. She was one of the last of the generation of reporters who recorded everything by hand with Gregg shorthand. She and her best friend, Aline Wright, also a reporter, mobilized an effort to get women reporters paid on equity with men, gathering a group that would become the Arkansas Court Reporters Association to successfully lobby the Arkansas legislature to make that happen. Many a young attorney relied on the experience and wisdom of Fern and Aline to guide them into their new profession. She had some great stories to tell about things that went on in those courtrooms in the last half of the 20th century. According to her friend, Harrison attorney, Ken Reeves, "Forty-nine years ago, I was one of those young attorneys who relied on Fern and Aline to guide me in my new profession. I quickly realized that they knew much more about the actual practice of law than I did, or would for a while to come. Maybe it was because they both had sons, but they delighted in helping me and other young attorneys. As she did with other rookie attorneys, Fern often politely suggested that I do, or not do, something in a particular case. Her constructive criticism and advice were always correct. I valued it knowing that she did it because she cared for me and wanted me to succeed. I am proud that in the last several years I got to spend time with Fern reminiscing about those days and thanking her for the positive influence she had on my career – and life."
Fern and Jim were always active in Democratic party politics, supporting the early candidacies of Dale Bumpers, David Pryor and a young Bill Clinton. Jim spent part of his career as Boone County Tax Collector.
Fern and Jim had two sons, Ed and Randy, but a host of others will rightfully claim the couple as surrogate parents and grandparents. They did a pretty good job of making one feel part of the family. In the early 80's, the Raulston clan bought an old fishing resort near Diamond City on Bull Shoals Lake and named it The Lower Place, after some land in Newton County their grandmother had lived on. It became the site of many happy extended family gatherings for three generations.
In her later years, Fern and Jim, along with other family members delighted in hiking the trails of the Ozarks. She and her sister Patty and brother-in-law, Bobby Frederick hiked the entire Buffalo River Trail system when she was in her late 80's, and visited all 52 Arkansas State Parks in 2009.
Until the last month, she lived independently in a home overlooking Bull Shoals Lake, and found great beauty and peace in watching the sun set over the lake. Fern was a member of the First Presbyterian Church in Harrison for more than 73 years, and loved her church family.
Fern was preceded in death by Jim and her brother JB. In addition to her sisters and their families, she's survived by Ed (Ginger), Randy (Kim), grandkids Mandy Hoffman (Michael), Marti Nicholson, Jack Nicholson (Emily), Will Nicholson (Ali), Julia Cherry (Dan), Thomas Nicholson (Rebecca), great-grandson, Nicholson Hoffman and "bonus grandkids," Brittainy and Brett Daiger. Second great-grandchild, Nora, is expected in November.
She was the consummate extrovert, always curious about the lives of others, delighted and energized by being around people.
Fern lived an amazing 92 years, full of adventure, intellectual curiosity, love and fun, even to the last days. We feel phenomenally blessed to have had her as an inspiration, a beacon and a source of energy and confidence. She spent her last bit of energy assuring us all, "It's all good!" She leaves a big old void. But she also leaves a lot of people whom she taught and inspired to fill it. If you're one of them, go ye forth.
The family would like to offer our tremendous gratitude to the staffs of Cox Medical Center Branson, North Arkansas Regional Medical Center, and Ridgemont Household at Hillcrest Home in Harrison, for their compassion, grace and generosity over the past few weeks.
At her request, a family gathering will be held in her and Jim's honor at a later date. In lieu of flowers, memorials made to The Nature Conservancy of Arkansas, Nature.org/tribute.
Arrangements are under the direction of Holt Memorial Chapel of Harrison. The online obituary and guestbook are available at: www.HoltChapel.com.