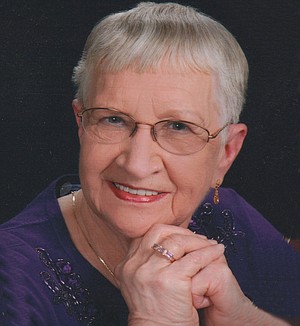 Marian L. (Johnson) Ferry, 95, of Blue Springs, Mo., passed away from natural causes on Saturday, June 18, 2022, at The Parkway Senior Living facility, where she had been a resident for seven years. She was born March 15, 1927, in Fostoria, Ohio, to Fred and Edith Brandeberry. At the age of five she moved to a farm near Woodland, Illinois, and was raised by a great-uncle and -aunt, Cory "Joe" and Maud Long.
Marian graduated from Milford Township High School, Milford, Illinois, in 1943 at the age of 16, and was a member of the National Honor Society. After high school she became a stenographer for the Department of Public Welfare in Watseka, Illinois.
Marian married Wayne L. Johnson on August 31, 1946, and to this union were born three sons and a daughter. Although her primary role in life was as a homemaker, she also served as a part-time U.S. Postal Service clerk in Kellerton, Iowa, where Wayne was a rural mail carrier. They also worked together at the Leon Journal-Reporter in various capacities. She was active in the United Methodist Church in Kellerton, and they enjoyed playing bridge with friends. Their annual camping trips and visits to relatives with their children took them from coast to coast and border to border in the United States, and gave their children the opportunity to see much of America. They were married for 25 years until Wayne's death from a car accident in 1972.
Marian married Floyd A. Ferry, a District Manager for the American Natural Resources Pipeline Company, on June 1, 1975 at the Kellerton United Methodist Church. Upon Floyd's retirement, they moved to Rogers, Ark., where they were both active in the First United Methodist Church and she served as a Stephen Minister. They helped plan the Rogers Adult Wellness Center and enjoyed square dancing as well as playing bridge. Marian and Floyd also enjoyed traveling and went on 13 cruises. They were married for 35 years before his death from cancer in 2010.
Having grown up on a farm and as a homemaker, Marian canned vegetables and fruits from her gardens each year and made hundreds of pies enjoyed by family, friends and church members. Throughout her life she had been in all 50 states, Canada, Mexico, England, Scotland, and Wales.
Marian, the last surviving member of her maternal and paternal generational families, was preceded in death by her parents; great-uncle and -aunt; husbands; brother, Charles Brandeberry; and foster brothers, Don and Arthur Long.
Survivors include a son, Jeff W. (Stephanie) Johnson of Reston, Va.; a daughter, Sarah (Dan) O'Reilly of Bend, Oregon; a son, Greg W. (Kathleen) Johnson of Ft. Collins, Colorado; a son, Brad W. (Shannon) Johnson of Blue Springs, Mo.; a granddaughter, Hilary (Ben) Hillis of Seattle, Wash.; a grandson, Zach Shephard of Enumclaw, Wash.; a grandson, Lance (Cashe) Johnson of Salina, Kansas; a stepdaughter, Janice (John) Brewer of Rapid City, S. D.; a stepson, Todd (Ruth) Ferry of Issaquah, Wash.; a stepson, Kent Ferry of Hampshire, England; three great-grandchildren, Gavin, Siena, Londyn; 10 step-grandchildren, 18 step-great-grandchildren; and several nieces and nephews.
Following cremation, a private graveside ceremony and burial will be held at the Maple Row Cemetery in Kellerton, Iowa, at a later date. Memorials may be made to the First United Methodist Church in Rogers, Ark.