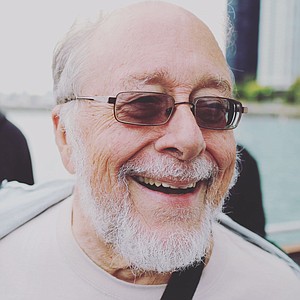 C. Tucker Steinmetz, 81, of North Little Rock, noted Arkansas journalist, actor, and social worker, died on May 26, 2022.
He was preceded in death by his parents, Cecil J. Steinmetz and Verba L. Steinmetz; his brother, Cecil R. Steinmetz; niece, Terri R. Steinmetz; nephew, Michael W. Steinmetz; sister-in-law, June Steinmetz, and stepson, Walt Childress.
He is survived by his children, David Tucker Steinmetz and wife, Martha, of North Little Rock, and Lisa Karin DuBose and husband, Tony, of Conway; five grandchildren, Kyndle Daniels, Austin Steinmetz, Jeffrey DuBose, Daniel DuBose, and Savannah DuBose; and three great-grandchildren, Corbin Daniels, and Reese and Graham Steinmetz. He is also survived by his two former spouses, Maureen Leverett, the mother of his children, and Ann Childress; stepsons, Allen Childress and Benton Childress; and step-grandsons, Lucas and Levi Childress.
Mr. Steinmetz graduated from North Little Rock High School, then earned a Bachelor of Arts degree in English from Hendrix College, and a Master's Degree in Social Work from the University of Arkansas at Little Rock. He worked in several professions during his lifetime, beginning with the Methodist Ministry while still a student at Hendrix College. He taught English as a Second Language for several years at Lydia Patterson Institute in El Paso, Texas, while also serving a Mexican Methodist church in Deming, New Mexico, as pastor. Upon moving back to Arkansas in the mid 1960s, Mr. Steinmetz entered the newspaper field and became a journalist with the Crossett News Observer, the Pine Bluff Commercial, the Arkansas Democrat, the Philadelphia Inquirer, and the Arkansas Gazette. After earning his degree in social work, he founded and became the CEO of Birch Tree Communities, a statewide network of group homes for mentally ill clients.
Mr. Steinmetz loved nature and enjoyed walking on forest trails. He sailed and fished and loved the lakes, especially Greers Ferry Lake, the lakes of Hot Springs, and Lake Michigan during the brief time he lived in Chicago after his retirement. He was a voracious reader, reading everything from novels to poetry to philosophy, and could discuss all of it at great length. He was an actor and appeared in many plays at the Weekend Theater, but his greatest joy in retirement was his family. He was very proud of his two children, and loved his grandchildren and great-grandchildren fiercely, in addition to loving and caring for two family dogs, Zeke and Georgie.
In accordance with his wishes there will be no funeral or memorial service. The family will have a private gathering to reminisce and scatter his ashes at a future date. Donations in his memory may be made to the Weekend Theater, Hendrix College, or Birch Tree Communities.
Arrangements have been entrusted to A Natural State Funeral Service. 2620 West Main Street, Jacksonville, Ark. 72076. 501-982-3400. www.anaturalstatefuneralservice.com