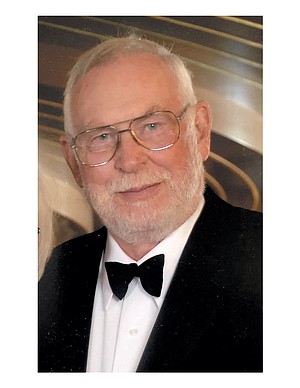 Anthony "Tony" Howard Barnes of Siloam Springs, Ark., was a beloved husband, father, grandfather, and great-grandfather throughout his incredible 89 years of life. Tony passed away peacefully on November 19, 2022 with his cherished children Sally and Mark by his side. Tony's rich life began on January 23, 1933, in North London. He was the son of Lillian Howard and Reginald Barnes. He would be the first to tell you that he grew up not in England, but at sea, after enrolling in Naval Training College. Shortly after meeting his wife, the two transitioned to a new life on land where they started a family. Tony's resourceful and gregarious nature took a job vending chicken feed and developed it into a career selling chickens that carried him all over the globe. He finally settled in Siloam Springs, Ark., where he became President of Cobb-Vantress. Tony retired in 1996 and used the remaining 26 years to relax and enjoy the life he worked so hard to cultivate. Tony found great happiness in many things but especially playing golf, taking cruises, socializing with friends, watching detective shows, serving his community, and taking long drives in his classic British cars. He enjoyed many of these pleasures in the company of his children and grandchildren. He will be remembered for many things but especially his English charm and knack for storytelling. Tony was predeceased by his first wife of 48 years, Dorothy Sharpe Barnes, and his second wife, Bep Morrison Barnes of 12 years. He is survived by his daughter, Sally Carothers (Darin, Fayetteville, Ark.), and his son Mark Barnes (Eileen, Springdale, Ark.) as well as his seven grandchildren, Chelsey Schneider (Bobby, Pickerington, Ohio), Devin Carothers (Jenna, Los Angeles, Calif.), Luke Carothers (Megan, Springdale, Ark.), Liam Carothers (Maisie, Fayetteville, Ark.), Bryant Barnes (Charli, Tulsa, Okla.), Kate Barnes (Fayetteville, Ark.), Tim Barnes (Madison, Springdale, Ark.) and his two great-grandchildren, Emma Rose and Isaac Howard Barnes (Tulsa, Okla.). His family will continue to honor his legacy by living their lives to the fullest. A service of remembrance will be held on Monday, November 28th at 2 p.m., at Grace Episcopal Church in Siloam Springs with burial to follow. In lieu of flowers, donations can be made to the Siloam Springs Boys & Girls Club. You can celebrate Tony's life by having a cup of tea, glass of whiskey, or playing a round of golf in his honor.