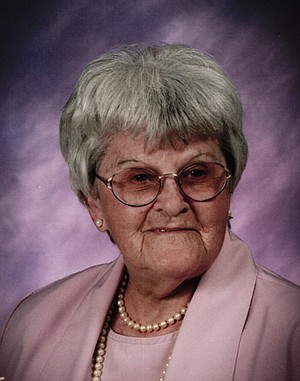 Hermanene Patricia "Pat" Cathcart, was born in Decatur, Ala., on June 7, 1921, to Emil and Catherine Jordan Huber. She moved with her family to Pine Bluff in 1924, and she attended Pine Bluff and Watson Chapel Schools. She worked at Davis Hospital for a couple of years before beginning her career at Ben Person, first as a feather sorter, then later in the packing department. Pat was a charter member of the Matthews Baptist Church, and she and her husband, Elmer Orien Cathcart, were the first couple married in the church. Later she attended Southside Baptist Church for a time before moving back to Matthews. More recently, she attended Green Meadows Baptist Church with her son, Bobby. She was a kind, gentle woman filled with wisdom. Her family was blessed to have her. You didn't have to be told she was a Christian, she exemplified that every day in the way she lived her life and how she treated others. You never heard her say a bad word, never saw her angry, never saw her down, she never gossiped or said anything bad about anyone. She would pray for those who wronged her.
Pat truly walked a life trying to live as Jesus tells us to. She was always faithful and thankful regardless of the situation. They never had a lot in terms of material things, but love abounded in their home, and she always considered herself blessed beyond measure. She never missed birthdays and was always giving when sometimes she had very little. Pat was truly an Angel walking the earth.
Pat passed away on Tuesday, September 20, 2022, at her home, at the age of 101. She was preceded in death by her husband; her parents; a bonus son, Paul A. Wright; a brother, Marshall Huber; and her sisters, Agnes Lee, Stella, and Julia. She will be selfishly missed yet always lovingly remembered. She anxiously awaited for the Lord to return for her and she is where she's wanted to be.
Survivors include her sons, Bobby Cathcart and wife, Geauchita, and Jerry Cathcart and wife, Pat, and another bonus son, Tommy Wright; her grandchildren, Michael and wife, Lana, Sheri and husband, Tim, and Bobby; her great-grandchildren, Tyler, Nick, and Zach; a special niece who she loved like a daughter, Donna Lyons; and a number of other relatives.
Visitation will be held at 1 p.m., on Saturday, September 24, 2022, at Ralph Robinson and Son Funeral Directors followed by a celebration of her life at 2 p.m., in the Chapel. Burial will follow in Graceland Cemetery. Memorial contributions may be made to Green Meadows Baptist Church, 4201 Hwy. 65 South, Pine Bluff, Ark., 71601.