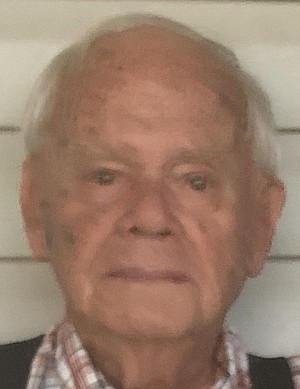 James C. "J.C." Wagley, Jr., 93, departed peacefully from this life and went to be with the Lord on Saturday, January 20, 2023. He was born December 2, 1929, in Morrilton, Arks.
In addition to his parents, James C. Wagley, Sr. and Goldie Marie Flowers Wagley Hall, he was preceded in death by his wife Beulah Mae Mash Wagley Wieburg, His daughter Cecilia Dion Wagley Lynn and his siblings David Wagley and Bill Wagley of North Little Rock, Ark.
He is survived by his siblings Carroll Wagley of Scott, Ark., Richard Wagley of Benton, Ark., Ray Wagley of Leavenworth, Kan., Murline Swift of North Little Rock, Ark., and Judy Hayes and Becky Caldwell of Sherwood, Ark.
He is survived by his two daughters, Harriett Pellman of Leavenworth, Kan., and Darlean Tesch of Pensacola, Fla., a son James C. "Jim" Wagley, III of Fort Smith, Ark., eight grandchildren, five great-grandchildren, and numerous nephews and nieces.
During his lifetime, he worked for Mitchell's Manufacturing, Hickory Springs Manufacturing, Fox Manufacturing all in Fort Smith, Ark., and worked 30 years for Capco Cement and Asbestos Pipe Company in Van Buren, Ark.
He was a devoted Christian and attended the Open Door Assembly of God Church in Mulberry, Ark.
Pallbearers will be: Caleb Wagley, Hunter Wagley, Maddox Wagley, Jim Bruso, and T.C. Strawhacker.
Reverend Tim Sullivan from The Pentecostal Church of Fort Smith, Ark., will be officiating the funeral service.
Funeral Service will be conducted at Edwards Funeral Home Chapel at Fort Smith, Ark., on Thursday, January 26, 2023, at 10 a.m., visitation will be from 9-10 a.m., at the Chapel and interment will be at the Forest Park Cemetery in Fort Smith, Ark.
The family would like to thank the Methodist Nursing Home of Fort Smith, Ark., for all its acts of care and kindness to our dad; also thank you to Cassie and Kelly in the activities area and thank you to Head Nurse Kelly on the northwest wing of the nursing home and all of her nurses and aides.
Thank you to the Heart of Hospice of Fort Smith for caring so much. A special thank you for Erin, Diana, and Amanda for taking care of our dad and being his friend in the hour of need.
Memorials can be sent to the American Lung Association, 55 W. Wacker Drive, Suite 1150, Chicago, Illinois 60601 or go to www.lung.org
To view the online guestbook, please go to www.edwardsfuneralhome.com