SNOW STORM: Latest coverage from around the state 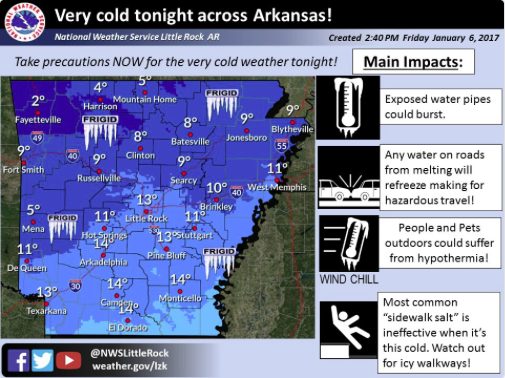 That snow is likely to stick around until Saturday morning, as the National Weather Service predicts that Friday night temperatures in northern and central Arkansas will dip into the single digits.

National Weather Service meteorologist Willie Gilmore said the west-central part of the state saw the most snow, with the area from Russellville over to Conway seeing about 2 to 3 inches. More snow was falling there Friday afternoon, so the numbers could climb a little higher, Gilmore said.

Gilmore said 1/2 to 1 inch of snow was recorded in Little Rock, with about 1/2 of an inch recorded in the northern part of the state.

Gilmore said the snow would be gone by next week, when temperatures will reach the 50s and 60s. “It just takes some sunshine” to get rid of the snow, he said.

NOON UPDATE: Second round of snow to bring waves of dustings in central Arkansas 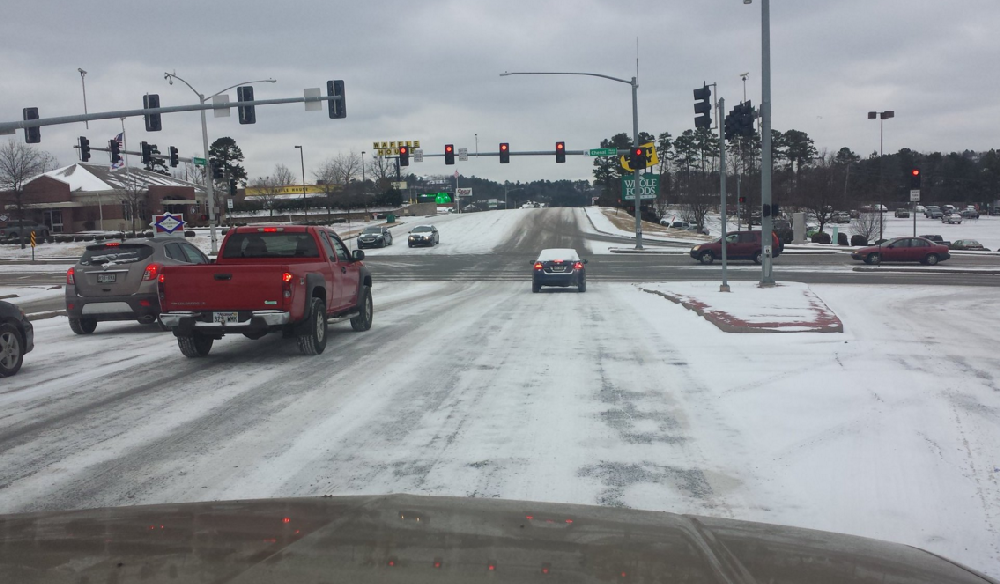 As light flurries swirl over the middle of the state, forecasters predict pockets of heavier snowfall to pick up around noon, and those flakes have staying power, said meteorologist Willie Gilmore with the National Weather Service.

The next round of snow is “not going to be a continuous thing” stretching through the afternoon hours, Gilmore said. Rather, dustings will come and go in waves in central Arkansas starting around noon until 3 p.m., adding to 1 inch or so that has already touched down in Little Rock and the 2 to 3 inches reported in Conway and Russellville, he said.

Little Rock’s count isn’t official, he noted, but a quarter-inch of snowfall had already blanketed the ground by 6 a.m. at the Little Rock International Airport, where the National Weather Service conducts its measurements. So assuming more than 1 inch will fall by the end of the day is a pretty safe bet, he said.

Starting this afternoon, moderate snowfall should fall in most of the state, with heavier bouts of around an inch and a half expected in western and southwest Arkansas, Gilmore said. Flurries should taper off around 3 p.m. in the central region, and not much precipitation is expected anywhere in Arkansas after sundown, he added.

But the current conditions mean the fallen flakes will likely stick around, Gilmore said. Temperatures in the metro area are hovering in the low 20s and are not expected to spike anytime soon, he noted. And in northwest and west Arkansas, folks could see their thermostats drop into the single digits overnight.

“Whatever is actually falling is not really going to go anywhere,” Gilmore said.

The forecast doesn’t warm up much tomorrow, either. Temperatures might push past freezing in central Arkansas, but that’s still a maybe, Gilmore said. The larger warmup will be Sunday and later in the week, he said, but people hoping for change in the weather today will have to wait.

“It doesn’t take a lot of snow to cause many problems,” he said.

People should always drive with care, Gilmore said, although today he’s noticed some people might be taking that motto to extremes. He and his colleagues have seen a few drivers go too slow at the incline of a hill only to slide back down the slope well before cresting the top.

“It’s nice to be cautious,” Gilmore said. “But sometimes you need a little momentum.”

When it comes to keeping those roads clear, the state Highway and Transportation Department relied on a single product to do most of the heavy lifting today: salt brine.

Because there was no freezing rain or sleet, crews were able to pour the solution on the blacktop of many state highways starting last night, and they worked into the early hours of the morning until the flakes started to fall, said Arkansas Highway and Transportation Department spokesman Danny Straessle.

In the best conditions, the brine dries and leaves a salt residue on the road in anticipation of winter weather, Straessle said. Then, when the snow starts to fall, the mixture releases heat and warms the flakes and slush from the bottom up. Then trucks dump more salt on top, and the snow is melted away from both directions, he said.

The “beauty” of the entire operation is that after the brine melts the snow, it washes away for good — no extra cleanup needed, Straessle said. And without any ice buildup, “we can just push the snow off the road all day. That’s not a problem,” he said.

But just because the department got a jump on this snowfall does not mean drivers shouldn’t take caution, Straessle added. As the snow melts, water will start running across roadways and will likely refreeze when the sun goes down, he said.

So even though it’s a Friday night and “everybody wants to get out,” people should still drive slow, especially when there’s the possibility of skidding on black ice.

“You won’t know it until you hit it,” Straessle said. 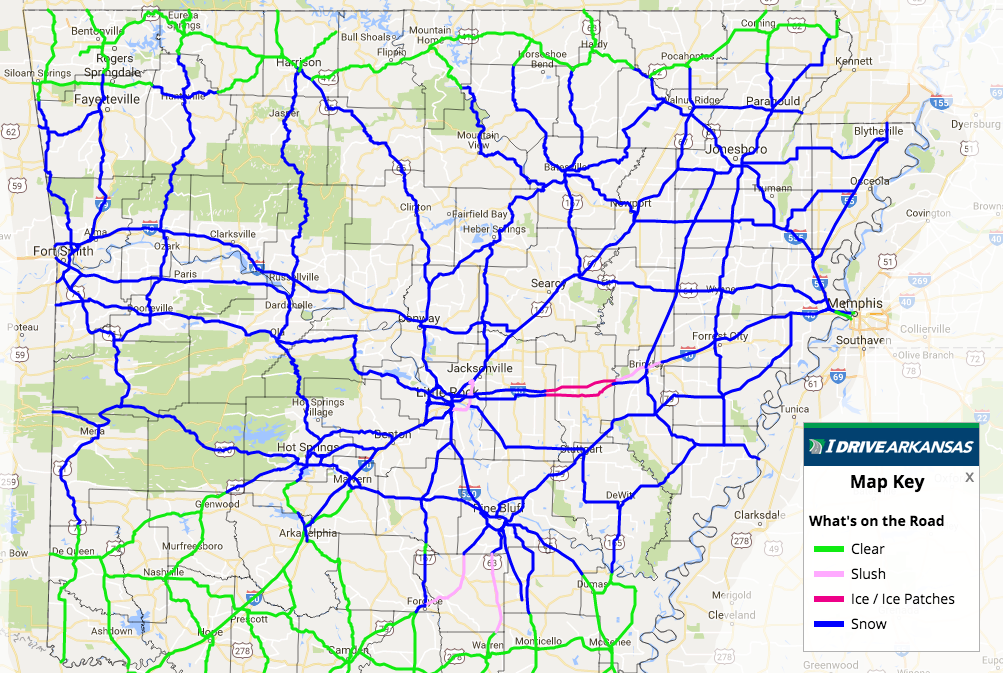 The latest update from the Arkansas Department of Highways and Transportation shows snow-covered roads across much of Arkansas as a wintry system moves through.

A map posted on DriveArkansas.com at 9:30 a.m. showed snow covering at least parts of all of the state's major interstates in central Arkansas, including I-630, I-30 and I-40 in the Little Rock metro area. Slush was reported on I-440.

There were numerous reports of stalled vehicles, slideoffs and wrecks around the state, including an accident on Interstate 30 in Saline County that was reported to involve at least one injury and a car that swerved off a snowy Markham Street in Little Rock before crashing into The Oyster Bar (PHOTOS).

The slick conditions were roughly north of a line from De Queen to Arkadelphia to Fordyce to Dumas all the way through part of the northern-most row of counties in the state.

Forecasters say the slick conditions may stick around for some time because temperatures aren't expected to rise above freezing today and additional snowfall is possible. Crews from the state are working to clear the highways. 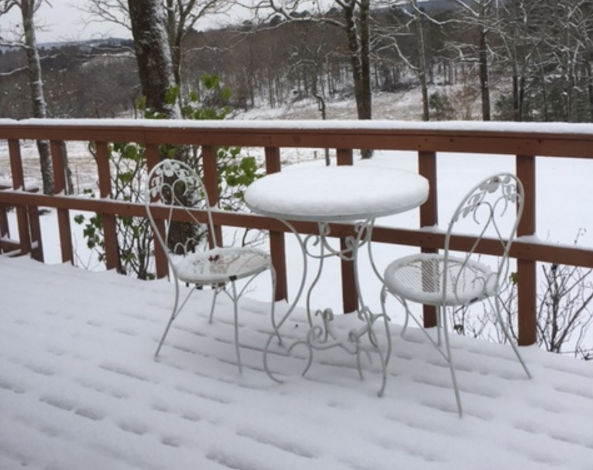 The National Weather Service has compiled some unofficial reported snow totals from cities around the state: 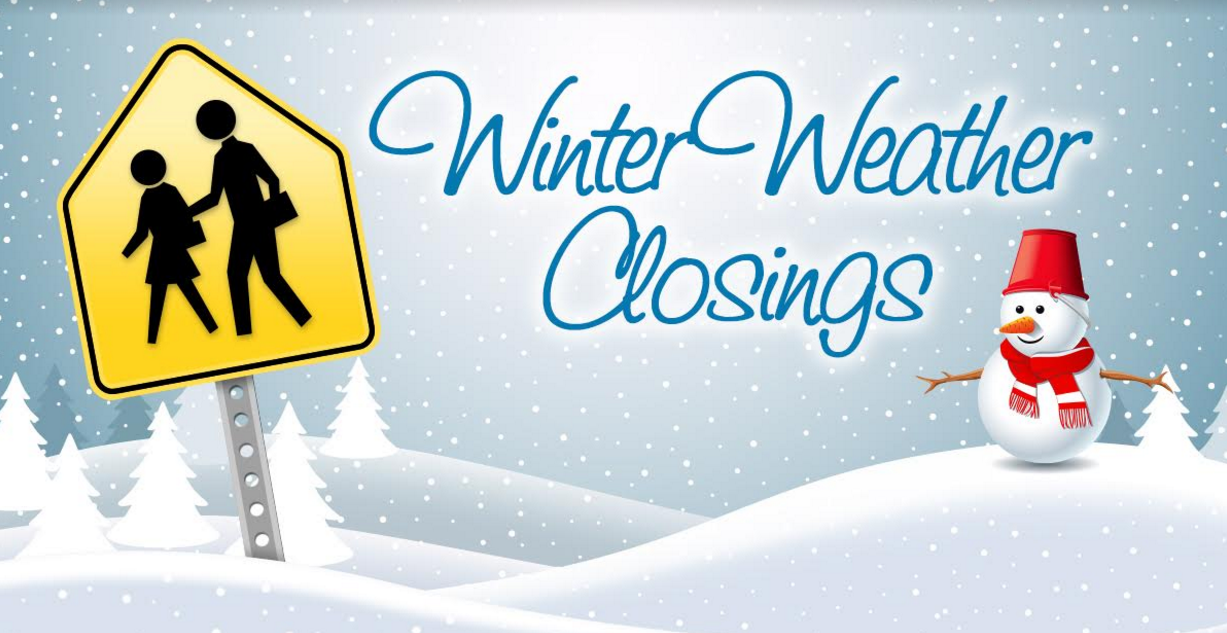