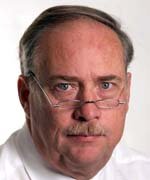 Brummett’s career in news began when he was in high school as a part-time reporter for the Arkansas Democrat. He moved to the Arkansas Gazette in 1977. He wrote a political column for the Gazette from 1986 to 1990. He was an editor for Arkansas Times from 1990 to 1992. In 1994, his book, High Wire: From the Back Roads to the Beltway, the Education of Bill Clinton, was published by Hyperion of New York City. He became a columnist with the Democrat-Gazette in 1994. In 2000, he signed a deal with Donrey Media Group, now known as Stephens Media, and wrote for them for 11 years. He rejoined Arkansas Democrat-Gazette as a columnist on Oct. 24, 2011.
You can read his blog at: http://brummett.arkansasonline.com/