The maps above and below include information about more than 2,800 structurally deficient and functionally obsolete bridges in the state. Several entries were excluded due to missing coordinates in data provided by the state Highway and Transportation Department. The data from 2014 was compiled as part of the National Bridge Inventory. 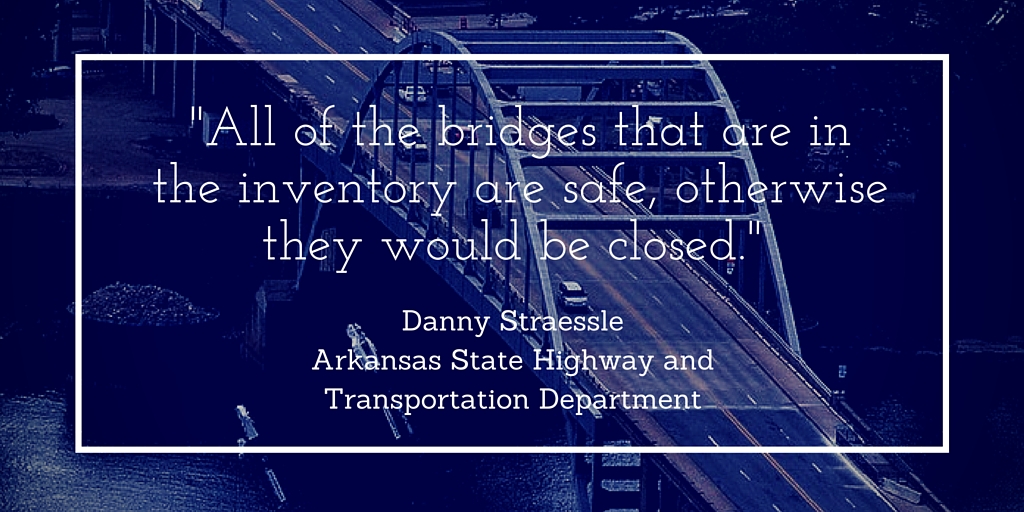 They range from county roads crossing drainage ditches to highways that span the Arkansas and Mississippi rivers.

In total, at least 2,855 bridges in Arkansas do not meet federal standards and have been labeled "functionally obsolete" or "structurally deficient," according to data provided to ArkansasOnline by the state Highway and Transportation Department.

The substandard bridges are so common that when plotted on a map, they form a near-perfect outline of the state.

The reasons why a particular bridge can be labeled obsolete or deficient are numerous, and transportation officials caution that bridges labeled with either status are not inherently unsafe.

In general, structurally deficient bridges are labeled as such due to the deterioration of structural elements, while functionally obsolete bridges do not meet current design standards.

For example, a bridge built with 10-foot-wide lanes before the current 12-foot standard was enacted would be labeled functionally obsolete.

A structurally deficient bridge with a crumbling concrete exterior and exposed rebar may not pose a hazard for drivers above, but constant patching eats into maintenance funding, highway officials noted.

"All of the bridges that are in the inventory are safe, otherwise they would be closed," said Danny Straessle, a spokesman for the highway department.

Officials say the numbers represent a growing gap between the amount of work needed to keep bridges and roads operational and the reality of available funding.

Over the next 10 years, the state highway agency estimates it will need $20.4 billion to maintain and upgrade roads, but it only expects to receive $3.6 billion in state and federal funds.

"There is not enough money — state, federal or local — to address all the needs in the state," said Jim McKenzie, the executive director of Metroplan, a nonprofit regional planning organization for central Arkansas.

Many of the bridges in Arkansas, especially in rural areas, were built by the Works Progress Administration and have lasted long past their prewar era design, McKenzie said.

Generally, the older a bridge is, and the lower its sufficiency rating, the more it costs to maintain and the more it needs to be inspected, Straessle said. The average bridge is built to last 50 years.

Funding for bridge replacement is not allocated based on how poorly a bridge is rated but on factors such as how construction will affect traffic and how many people rely on the bridge to get from one place to another.

"Money follows the traffic," Straessle said. "The impact of closing a bridge is huge."

In one ongoing high-profile project, $98 million is being spent to replace the Broadway Bridge between the downtowns of Little Rock and North Little Rock.

According to state records, the 92-year-old bridge is structurally deficient, with low ratings for its deck, superstructure and substructure. But it's not the worst; 26 other bridges had lower sufficiency ratings, according to the data.

A look at the numbers

When Arkansas is compared with other states in the most recent National Bridge Inventory, the percentage of bridges in the state that don't meet standards is slightly lower than middle of the pack.