Mistress of the night 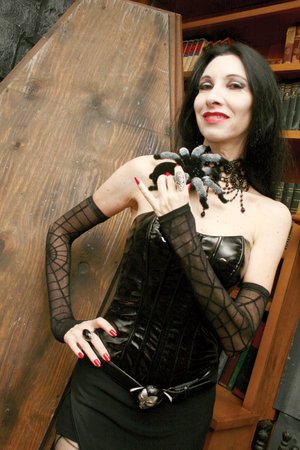 The first thing you might notice about Evelle LeChat, after the long, jet-black hair, is her clothes.

She wore an orange T-shirt with a spider in a web that said, "Bite Me," tapered jeans and black suede stiletto boots. The ensemble was a far cry from the costumes she wears as the hostess of the locally-filmed Night Frights program broadcast in Conway, but she still managed to exude a macabre Morticia-Addams-esque air that simply must come naturally.

Also like the matriarch of the Addams family, she has two passions: dancing and horror.

"She was almost born to do this sort of thing," said John Ary, producer of Night Frights and Natural State Productions.

She was born in Cairo, Egypt, and traveled the world modeling, dancing and performing in places like Hawaii, Paris, Greece and Spain, but has spent most of her life in Los Angeles.

Her parents divorced when she was about 12, and her father settled in Little Rock. When he died about a year ago, LeChat arrived to "settle the estate."

She learned about the casting call for the Night Frights show from a friend and auditioned.

"They had me do a review of The Brain That Wouldn't Die," she said. "I had to show up in costume, and I had to pretend I was the hostess providing a review of the movie."

She had never seen the film - about a doctor keeping alive the head of his decapitated girlfriend in his laboratory - but after researching it, she arrived at the audition with 16 pages of notes.

Ary said, after her inventive audition, casting LeChat in the role was a no-brainer. She showed up with her own prop inspired by the movie's decapitated head and this "crazy long black dress : and five or six monologues about The Brain That Wouldn't Die, and that was pretty much it for us."

A week later, LeChat was told she got the part.

Ary said LeChat brings creativity and energy to the show.

"She does a fantastic job," he said. "Her background's in ballroom dancing, and she's able to use a lot of that energy and presence when she's in front of the camera."

He lets her have free rein over her costumes, and says he's always pleasantly surprised.

"She shows up and she has these great costumes. And we don't ask questions. We let her do what she does, and she does it great. We don't worry about it."

"I've always loved horror movies," she said. "I was raised on them. When I was a baby, I used to watch them with my mother."

Her first horror movie love was Dracula with Bela Lugosi. (Today she has a cat named after the performer.)

Besides motion picture macabre, her mother had a passion for Halloween and the two dressed in identical costumes every year.

"My mother would start making our costumes in August," she said. "They were always very elaborate, and we wore them door-to-door trick-or-treating."

Unlike the typical Halloween celebration where children roam the neighborhood while parents stay home to give out candy, LeChat's home was dark every year.

"We were never there," she said, laughing.

This Halloween, LeChat can be found at the Full Moon Horror Convention at the Statehouse Convention Center. Four episodes of Night Frights will be shown at Market Street Cinema during the convention's film festival, which will run Oct. 26-28.

Ary said Night Frights is only broadcast in Conway and he's looking for a station in Little Rock to carry the Friday and Saturday night program - even after Halloween is over.

"We plan to continue the program as long as people want to air it," LeChat said. "So far everyone seems to be really positive and seems to really like it."

As for her time in Little Rock, she says she'll stay until her time on Night Frights is over.

"I will stay here as long as the show is on. Then I will go back to California. I miss the nightlife."

She says there's plenty of the art and culture that she loves in central Arkansas, but she prefers life in the big city.

And unlike Morticia Addams, LeChat loves the sun.

Go to www.fullmoonconvention.com to find out more about the Full Moon Horror Convention and Film Festival.