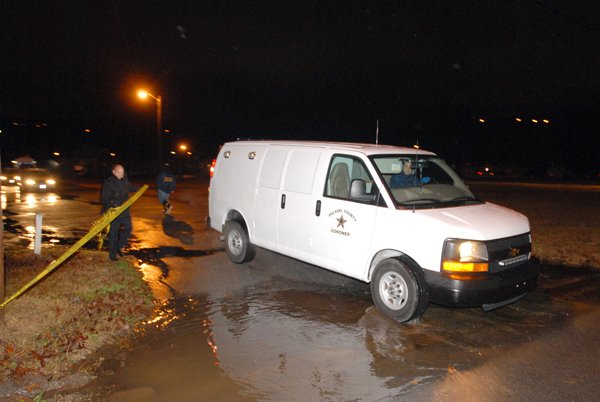 A Pulaski County Coroner's van pulls into the back parking lot of The Salvation Army located 1505 W. 18th Street in North Little Rock on Thursday evening. The man was found dead near a back door. Writer:

Shortly after 4 p.m., two black men wearing black clothing approached Philip Wise, 40, of Maumelle just after he had got out of a van in the parking lot on the north side of the charity’s community center at 1505 W. 18th St., Pulaski County Coroner Garland Camper said.

Wise’s three children - ages 4, 6, and 8 - were walking with him when the men approached them. One of the men pulled a gun, demanded money and then shot Wise, police said.

Stories related to the killing

The men then fled toward the nearby Windemere Hills housing projects, Camper said.

Wise’s wife, Cindy, also a major in the Salvation Army, was inside the community center during the shooting and called police, Camper said.

“It’s such a traumatic experience for those kids,” Camper said. “Christmas will never be the same for them.”

Police received the call at 4:17 p.m. On arriving, officers found Wise lying near the back door of the community center, said Sgt. Terry Kuykendall, spokesman for the North Little Rock Police Department.

Kuykendall declined to say whether the two men made off with any money.

Wise’s body was taken to the state Crime Laboratory in Little Rock where an autopsy will be performed, Camper said.

Salvation Army officials were working with police in the investigation, said Kathy Barbeire, a spokesman for the Salvation Army Central Arkansas Area Command. She said the organization would not be releasing a statement Thursday evening.

Police asked that anyone with information about the shooting contact them at 758-1234.

The Salvation Army is an international evangelical movement, according to a statement posted on its Web site.

Its mission is to “preach the gospel of Jesus Christ and to meet human needs in His name without discrimination.”