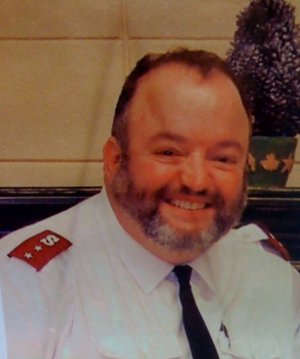 Maj. Philip Wise, a big teddy bear of a man according to those close to him, worked for three years in the very neighborhood he was gunned down in.

The 40-year-old father of three joined the Salvation Army along with his wife, Cindy, 16 years ago, and they had spent the past few years reaching out to those in the Baring Cross neighborhood. The North Little Rock center provides youth programs, weekly church services and Sunday School and a food pantry, among other services.

Police don’t know whether Wise, who was active in the community, knew his attackers, he said.

Wise was returning to that Salvation Army center at 1505 W. 18th St. with his children Thursday afternoon when two black men, both with handguns, approached him and demanded money. One shot was fired, and Wise was killed as his children stood by. His wife, who was in the center at the time, was the one to call 911.

The family was about to leave for a Christmas trip to West Viriginia.

"It's such a tragedy for the community," said Sgt. Terry Kuykendall with the North Little Rock Police Department. "I hope they realize the loss."

Maj. Harvey Johnson, Wise's boss for the past year and a half, said Wise was an all-around good guy, a big teddy bear who loved sports. With Wise's children and Johnson's grandchildren around the same age, they shared many birthday celebrations together with their families.

The Wises had just adopted their children — ages 4, 6 and 8 — last year, Johnson said. The three were siblings who came from an abusive family. They were receiving counseling after their father’s death, he said.

“He was involved in the fabric of that community in a lot of different ways,” Johnson said.

He described Wise as “a big boy” who played “a big old tuba” in a brass ensemble and used his love of music to try help others.

“He encouraged kids in music as an alternative to the life they were living,” he said.

Kuykendall said he knew Wise, although they were not close friends.

“Mr. Wise within the last two months had spent so much time raising money so that several hundred children in this community could have a good Christmas, and for this to happen ... on Christmas Eve is just a tragedy,” he said.

Wise was originally from Weirton, W.Va., and his wife, Cindy, was from Charleston, W.Va. They met 16 years ago at a Salvation Army school in Atlanta, Johnson said. Both had worked for the Salvation Army ever since.

“He’s touched a lot of people,” Johnson said. “But who would he have touched if he had been able to live out his career?”

Authorities are hoping anyone with information into the shooting comes forward. Crimestoppers is offering a $1,000 reward for an arrest and conviction in Wise's shooting. The Crimestoppers number is (501) 758-1234.

The Salvation Army said any donations made in Wise's name will go toward music instruction at the organization's summer camp.

A Wise Family Memorial Fund will be set up soon, according to Kathy Barbeire with the Salvation Army.

Information for this article was contributed by Tom Parsons of The Associated Press.