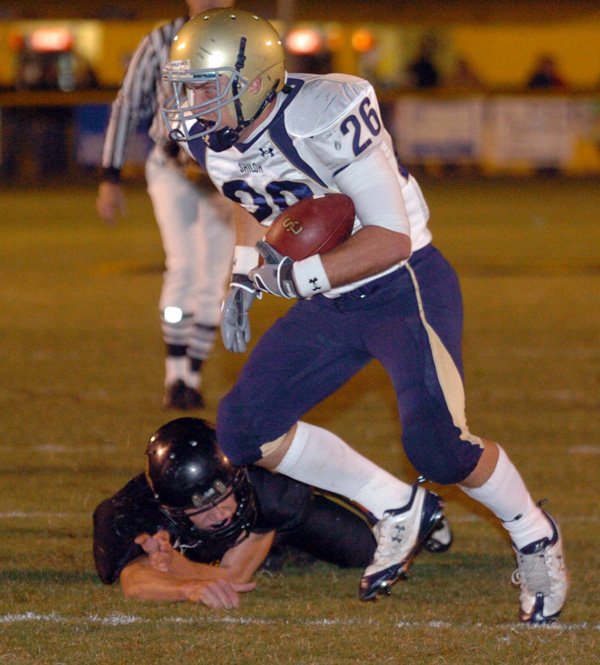 Shiloh Christian's Chris Bryant shakes a Prarie Grove defender on his way to the end zone in the first half of Friday nights game in Prarie Grove.

PRAIRIE GROVE — Shiloh Christian and Prairie Grove had one thing in common in the first half Friday. Both offenses moved toward Prairie Grove’s end zone.

Shiloh Christian, ranked No. 1 in Class 4A and No. 5 overall, scored on all seven first-half possessions, including touchdowns on their first six, en route to a 51-13 rout of the Tigers.

The Saints’ first-team offense retired for the night after Kiehl Frazier’s fifth touchdown pass with 5:44 left in the first half extendedthe lead to 41-0. It was 44-0 at halftime.

“If you can’t drive the ball and make some first downs, and they get it back and they’re very adept at scoring, it’s going to get very ugly,” Prairie Grove Coach Danny Abshier said. “It happened to us tonight.”

Frazier completed passes to four receivers - Chris Bryant, Jon Hawes, Zann Jones and Jake Scott - and each had at least one touchdown. Jones had 2 touchdowns among his 5 catches for 116 yards. Scott caught three for 102 yards and a touchdown.

Friday’s victory was the 29th consecutive for the Saints in conference games, dating to a 42-30 loss to Prairie Grove at Tiger Stadium in 2005.

Prairie Grove scored twice in the second half against reserves. Thomas Soehner caught a 12-yard pass from Chad Austin with 9:38 left in the third quarter. Dakota Daniels passed 58 yards to Landon West with 6:14 remaining.

In between, Mac Johnson ran 62 yards for the Saints.

Shiloh Christian finished with 507 yards of offense, including 210 on the ground. The Saints didn’t attempt a pass after Frazier went to the bench.

Dumas took a 7-0 lead on Sherrad Smith’s 11-yard run with 3:17 left before the halftime. However, Hayden Smith cut it to 7-6 for the Lumberjacks on an 8-yard run two minutes later.

Thompson gave Warren the lead for good with just under three minutes left in the third quarter on a 6-yard scoring run. Hayden Smith led Warren with 172 yards on 14-of-30 passing.

Yordi Moran scored on a 2-yard run for the Leopards in the fourth quarter.

BALD KNOB - Nick Glaze threw for 151 yards and two touchdowns and ran for 106 yards and another touchdown to lead Bald Knob past Class 4A No. 5 Stuttgart.

Glaze’s 45-yard touchdown pass to Trey Gavin three minutes into the game accounted for all of the scoring in the first half.

The Bulldogs held Stuttgart to 188 total yards. Jarrod Adkins and Blake Rouse each had a dozen tackles for Bald Knob, and Gavin added nine tackles and forced two fumbles.

Chris McFadden threw three touchdown passes for Class 4A No. 6 Ashdown (6-0, 3-0), including two to Tyrail Jetton. The other was to Michael Young.

The Ashdown defense scored a safety in the first quarter.