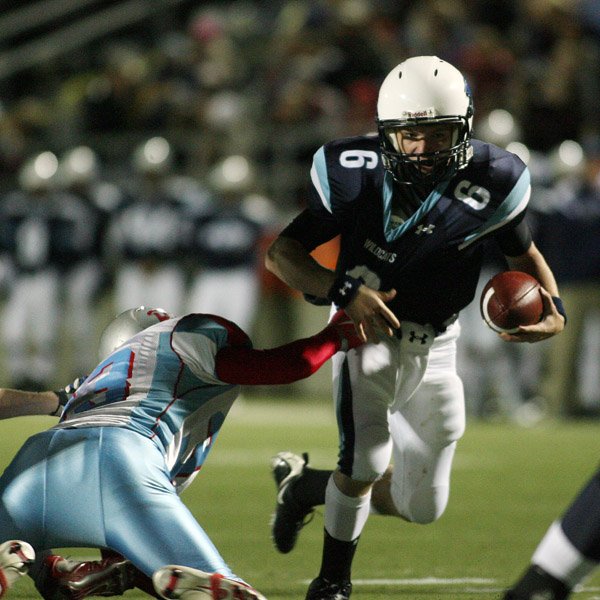 Second-ranked Springdale Har-Ber made the biggest defensive play at the end Friday, forcing a fumble in overtime to escape with a 16-13 victory over Fort Smith Southside at Jarrell Williams Bulldog Stadium.

Har-Ber (8-0, 5-0) opened overtime on offense, opting for an 18-yard field goal by Oscar Escobar to take the lead.

Then the defense took over. Lee Hollis fumbled on first down while losing 2 yards, but Southside recovered. After a penalty against the Rebels, Har-Ber’s Russ Reynerson recovered an errant pitch near the 20 to secure the victory.

“It was a typical Southside-Har-Ber game,” Har-Ber Coach Chris Wood said. “It was back and forth, a physical game. We were fortunate to get that turnover in overtime.”

The Wildcats dominated the first half, but Southside began chipping away over the final two quarters.

Gallo kicked a 21-yard field goal with 2:43 left in the third quarter for the Rebels’ first points.

After forcing a Har-Ber punt, the Rebels drove 45 yards in 10 plays with Hollis diving over from the 1 with 7:01 remaining.

Houston Pruitt fumbled at Southside’s 32 with 2:52 remaining, but the Rebels gained only 7 yards before Gallo’s tying field goal.

“We started off slow butgot going in the second half,” Southside Coach Jeff Williams said. “They just made a play there at the end.”

Both defenses had the upper hand much of the game. Har-Ber managed 244 yards of offense, including 150 on the ground. Southside rushed for 142 of its 178 total yards.

Har-Ber scored its only touchdown on its opening series, driving 68 yards using a mix of runs and passes. Shawn Sayarinh ran 7 yards for the touchdown with 6:36 left in the first quarter.

The Wildcats took 7:19 off the clock before stalling at the Southside 13. Escobar kicked a 29-yard field goal to push the advantage to 10-0 with 8:25 left in the first half.

A series of exchanges late in the first half summed up the Rebels’ struggles.

The Rebels took over near midf ield with 4:30 left and had a second-and-1 after a personal foul penalty against the Wildcats. Hunter Whorton threw incomplete twice sandwiched around a motion penalty. A high snap forced Gallo to rush his punt, and it netted minus-3 yards.

Southside’s Taylor Hudson intercepted a Ryan Luther pass at the 16, but Hunter was intercepted on third down by Drew Lawson, giving the Wildcats possession at Southside’s 9 after a 23-yard return and personal foul penalty against the Rebels.

The Wildcats had to settle for another 29-yard field goal by Escobar with 14 seconds left, giving Har-Ber a 13-0 halftime lead.

Escobar missed a 32-yard field goal on the first drive of the second half.

In a conference known forwide-open offenses, it’s Har-Ber’s defense that has drawn attention from opposing coaches.

“They’re a very talented defense,” Williams said. “They have a lot of experienced guys. They really don’t have much of a weakness and that’s why they’re 8-0.

“They’re probably the best [defense] in the league.”

The game was Har-Ber’s first of three consecutive against teams that started Friday with one conference loss.

“This is 7A-West football,” Wood said. “There’s nothing like it. Now we turn our attention to Fayetteville.”FAYETTEVILLE 45, ROGERS 10

FAYETTEVILLE - Quarterback Brandon Allen completed 17 of 28 passes for 210 yards and 4 touchdowns with no interceptions, and Fayetteville took advantage of three Rogers miscues to break open a tight game at Harmon Field on Friday night.

Rogers played without starting quarterback Andy Couture, who was sidelined with a concussion.

Rogers (2-5, 0-5) set up in power formations, including the Power I and Dead T, in an attempt to play keep-away from Fayetteville. The strategy worked in the first quarter. The Mounties pulled ahead 7-3 on a 59-yard touchdown run by Jason Oller with 3:10 left in the opening quarter. Oller led the Mounties with 71 yards on 10 carries.

“We go from a situation similar to Fayetteville, with a real good quarterback who can throw and run with some good receivers, to a full-house backfield,” Rogers Coach Ronnie Peacock said. “We don’t have anyone who can step in and do what Andy did. Obviously, we tried, but we knew we would have to do other things.”

Fayetteville took a 10-7 lead on a nine-play, 66-yard drive aided by a pass interference call and capped by Allen’s 10-yard touchdown toss to Michael Heintzman with 7:21 left in the second quarter. Allen completed 4 of 5 passes for 48 yards on the drive, including a 29-yarder to Demetrius Dean, who led Fayetteville with five catches for 77 yards.

ROGERS - Zac Stewart rushed for a school-record 270 yards Friday to lead the Rogers Heritage to a 7A-West victory.

The War Eagles (6-2, 3-2) secured their first Class 7A playoff berth and ended a two-game losing streak after starting the season with five consecutive victories.

The teams combined for 977 yards total offense, with Heritage picking up 530, including a school-record 311 rushing yards.

Springdale lost two fumbles and had two interceptions, with three of the turnovers leading to Heritage touchdowns.

“We just got beat,” Springdale interim coach Dennis DeBusk said. “They just flat whipped us. That’s all there is to it. They deserved to win the game.”

Stewart rushed 30 times and scored on runs of 50, 20 and 9. He dived out of bounds at the 2 with under one minuteleft to play and caught four passes for 55 yards.

Brown, who completed 13 of 25 passes with 1 interception, also connected with Travis Entwisle for a 67-yard scoring pass. Brown also scored on an 11-yard run.

Entwisle returned a punt 76 yards for a touchdown on the final play of the third quarter to lift Heritage to a 57-33 lead.

Barkey scored two rushing touchdowns, the second time with 21 seconds left in the first half to pull the Bulldogs (3-5, 1-4) within 36-27 at the half.

Heritage answered with three touchdowns in the third quarter.