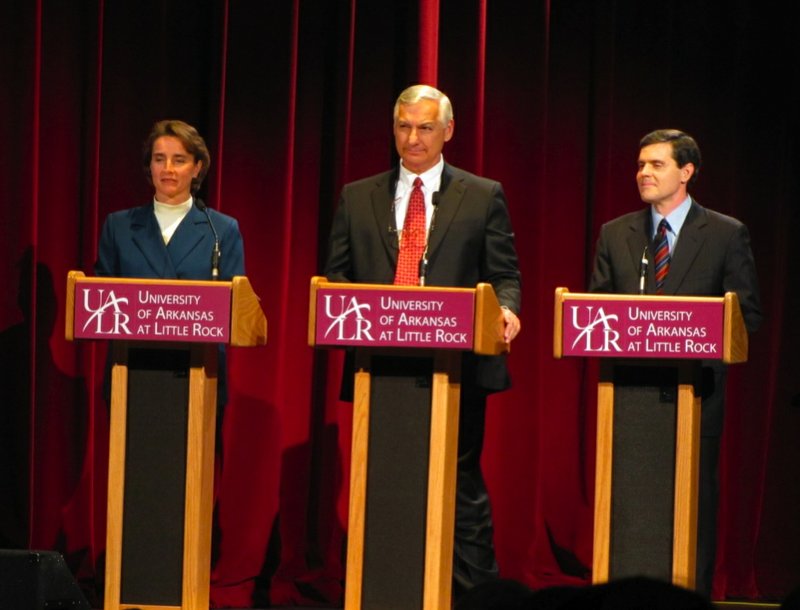 The three Democratic candidates for U.S. Senate shared a stage for the first time Friday night in a debate at UALR, speaking on topics ranging from social security to the recently-enacted healthcare bill to the negative advertising prevalent in the election.

Lincoln and Halter, whose campaigns have been engaged in a heated ad battle against one another, took several jabs at each others' records. And each also challenged the other to stop negative advertising.

Halter said his campaign has taken down a website critical of Lincoln while asking that she stop referring to him as "Dollar Bill Halter" and cease negative mailings.

Lincoln said she would do so if Halter would stop special interest groups that support him from running negative ads about her.

Halter said he thinks it was unseemly for Sen. Blanche Lincoln to accept contributions from Goldman Sachs, since it represents "the very folks you're supposed to regulate." Lincoln countered that she no longer is accepting contributions from Goldman Sachs and that she recently presented the "toughest reform bill on Wall Street that anyone has seen."

Halter also said Friday he would have voted against the $700 billion bailout of the nation’s banks that Lincoln supported in 2008.

Responding to a question about the Employee Free Choice Act, Lincoln said she does not support it as written.

"It creates division and distraction at a time we do not need that," she said, adding the focus of the country needs to be on the economy and creating jobs.

Halter said he is looking forward to a compromise being supported by Sen. Mark Pryor and five other Democratic senators.

On balancing the budget and reducing the federal deficit, Halter talked about his time in President Bill Clinton's budget office and how he helped turn a $280 billion deficit into a surplus.

"Since that time, unfortunately, Washington has wrecked our budget," he said.

Lincoln, responding to the same question, said she was the one that "took the tough vote in 1993 that passed that budget."

On healthcare, Lincoln said she stands by her vote despite polls that show a majority of Arkansans are against it.

"There are good things in this bill and it's going to help the quality of life for Americans and particularly Arkansans," she said, noting how it prevents insurance companies from denying coverage to those with preexisting conditions and allows people to keep their private insurance.

Halter also praised positive parts of the bill while criticizing Lincoln for changing her views on the public option, voting against the reconciliation bill and running ads that he said presented her alternately for and against the bill.

Morrison called the bill a "jobs killer" and said healthcare problems stem from Americans' bad habits and not insurance companies. At other times, he said he would never vote for a Supreme Court Justice who was pro-abortion, does not believe man-made global warming was that serious a problem and wants to abolish the Internal Revenue Service.

Asked about his party affiliation since some his views seem to lean Republican in many areas, Morrison said he's been a Democrat since birth but that his political party is hardly the most important way he defines himself.

"My problem is with the liberal Democrats in Washington," he said. "I think we should put party politics aside. I'm not happy with either political party."

A second debate between the same candidates is slated for Saturday at a newspaper editors convention in Downtown Little Rock.