The Heart of the Matter: Hope, fear fill anxious hours 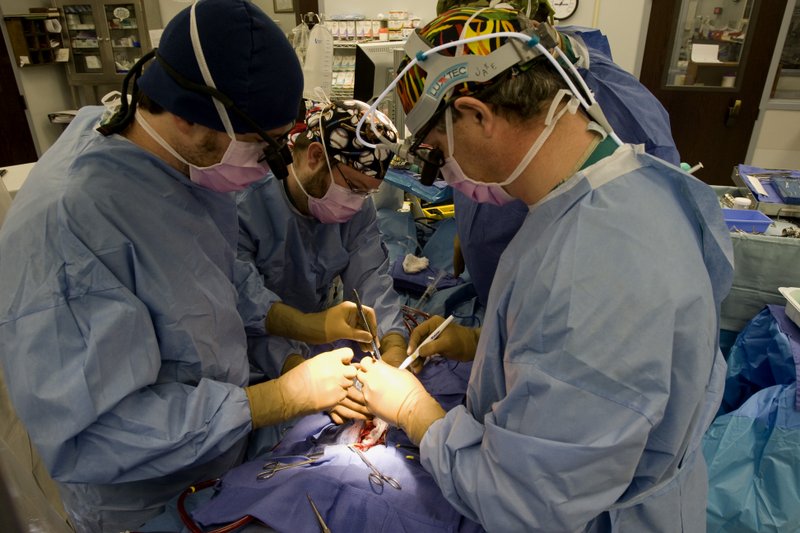 Second in a series.

Shannon Schroeder jerked awake from a deep sleep, her heart racing in anticipation. After five long, tense weeks of waiting, she knew this was the call she and her family had been praying for.

She answered the phone and Sherry Pye, heart-transplant coordinator at Arkansas Children’s Hospital, told her the news: Her 7-week-old son Christopher was getting a new heart.

Shannon made a flurry of phone calls before racing to the hospital. She was in the cardiovascular intensive care unit by 4 a.m., and spent 4 1/2 anxious hours at Christopher’s bedside before he was taken off to the operating room.

Doctors tried to prepare her for any outcome. 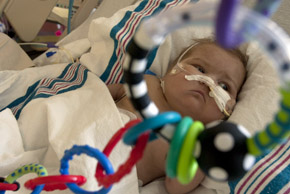 “They kept reminding me that he’s a very sick baby,” Shannon said hours later, sitting in a private waiting room surrounded by family and friends.

“His face is a little swollen, but to me, with a mom’s eyes, he doesn’t look like a sick baby. He looks like a beautiful baby.”

Earlier that same morning, her husband, Little Rock native George Schroeder, was trying to get to Arkansas.

He was more than 2,200 miles away at the family’s home in Oregon, where he works as a sports columnist for The Register-Guard in Eugene. He’d come to Little Rock a few times since his son was transferred from a Portland hospital Dec. 9, but had to go back to work to support the family.

George braced himself when he heard the phone ring. He knew right away it was his wife calling. Either she had the news they’d been hoping for, or something was terribly wrong.

“I didn’t know what to expect. I knew it was either good or bad,” he said.

A wave of relief washed over him when he heard Christopher would be getting the transplant.

“I thought, ‘Wow, Lord, you’ve answered our prayers for a heart,’” he said.

George was able to catch a 6 a.m. flight to Arkansas. He arrived at the hospital just seven minutes ahead of the transport team carrying Christopher’s new heart.

On the medical side, news of an available heart set into motion a highly coordinated chain of events.

Surgeons and medical staff at Children’s Hospital collaborated with the donor hospital in another state, Arkansas Regional Organ Recovery Agency and the United Network for Organ Sharing.

The name and location of an organ donor are kept confidential. The Schroeders have never been told even what state Christopher’s heart donation came from.

A team from Children’s Hospital, including congenital cardiothoracic surgeon Dr. Michiaki Imamura, flew to get the donor heart from an undisclosed location within 500 miles of Little Rock.

In addition to the surgeons, both hospitals had to call in extra staff to help in the operating rooms and run lab tests to determine whether the heart was healthy and a good match for Christopher.

At Children’s Hospital they called in registered nurses to assist with the transplant, an anesthesiologist and perfusionists to operate the heartlung machine.

As Christopher’s transplant coordinator, Pye got updates each step of the way.

At 1:45 p.m. she got word: The plane carrying the heart was in the air and headed back to Little Rock.

Shannon said waiting for the heart to arrive felt like forever.

In the quiet waiting room, the small crowd of family and friends bowed their heads to pray. They prayed that God would bless the surgeon’s hands, that he would support the donor’s family in their time of grief and that their son’s body would accept the new heart.

“We have so many friends and family praying for us, and we really believe God hears us when we pray,” Shannon said. “It was just an encouraging time.”

Christopher went in for surgery at 8:30 a.m. While it would be hours before the heart arrived, Dr. Robert Jaquiss, Children’s Hospital chief of pediatric and congenital cardiothoracic surgery, wanted to get started.

Christopher’s complex heart anatomy meant Jaquiss had some work to do to prepare his body for a normal functioning heart.

One of Christopher’s many heart defects was that instead of having one vein carrying oxygen-poor blood to the right side of the heart, he had two veins carrying blood from the body to both sides of the heart.

Jaquiss, who has been doing heart transplants since 1993, had to remove the original heart and connect the two veins so all the blood was directed to the new heart’s right atrium, where it could be pumped to the right ventricle and out to the lungs.

Once the preparations were done, the surgery team stood at the ready.

Christopher lay on the operating table connected to a heart-lung machine that steadily pumped blood from his tiny body, infused it with oxygen and pumped it back into his arteries. He was covered in blue cloth with only the small opening in his chest exposed, ready for his new heart.

An assortment of sterile surgical tools lay in neat rows on a nearby table. A plain plastic container off to the side held Christopher’s discarded and malformed heart.

Just before 3 p.m., registered nurse Jeff Sheridan walked into the room carrying an ordinary-looking blue cooler, like one would use for a picnic.

GETTING A NEW HEART

The room was suddenly abuzz with activity. Sheridan opened the cooler and pulled out the tiny heart, which was suspended in bluish liquid in a plastic cylindrical container. Sheridan handed it to registered nurse Richard Frizzell, who carried it to the operating table.

Assisting Jaquiss were Imamura, Frizzell and registered nurse Michael Tucker. Working within a hole that measured about 1 1 /2 by 3 inches, Jaquiss used a tiny, curved needle that resembled an eyelash to stitch the heart in bit by bit - attaching the pulmonary vein, the inferior and superior venae cavae, the aorta and the pulmonary artery.

The room was quiet as the four men worked. Their focus was intense.

Both surgeons wore magnifying glasses, allowing them to better see the minute needle and thread. With each stitch Jaquiss made, Imamura was there to take the thread and finish the loop or tie it off.

The nurses passed over tools or supplies as needed - often before being asked - and kept the surgery site clean by regularly ejecting fluid over it with a syringe.

It was a race against time. A heart stays viable outside the body for only so long.

At 3:44 p.m., the new heart was in place and beating. In some cases, surgeons have to electrically shock a transplanted heart to get it working, but Christopher’s new heart began working as soon as it was sewn in.

‘WE’VE GOT A TICKER’

The surgery continued for about two more hours. The team repeatedly flushed the new heart with saline solution and then suctioned it away, studying the fluid’s color. The clearer it looked, the less bleeding there was around the heart. And the less bleeding, the better.

At any given time, there were nine to 10 people in the room, including a reporter and photographer. The hospital staff members were assisting with the surgery, getting supplies, managing the anesthesia and monitoring the heart-lung machine.

Jaquiss inserted a right atrial line, which would allow them to monitor blood volume in the heart after surgery.

At 4:50 p.m., Christopher was taken off the heart-lung machine.

“He’s working on his own right now,” Sheridan said of Christopher’s heart.

Happy with how well the heart was working and the limited bleeding, at 5 p.m.

Jaquiss declared, “We’ve got a ticker.”

Suddenly the mood in the room lifted.

The heart-lung machine was pushed off to the side and cleaned, and someone turned on a small stereo that played classic rock ’n’ roll tunes at low volume in the background.

Sheridan stepped up to the operating table and took photos of the newly transplanted heart for the family with a camera Christopher’s aunt had given to him.

At 5:52 p.m., after a full day on his feet, Jaquiss finished the last in a line of straight, clean stitches up the middle of Christopher’s pale little chest.

George and Shannon sat cloistered in the waiting room with family and friends the whole day, feeling a mixture of elation and exhaustion.

They were overwhelmed by the hope the new heart offered their son but also scared because he was undergoing such major surgery. Mostly, they were immensely grateful to the unknown family who had lost their baby and were generous enough in their time of grief to give the gift of life to others.

George said he hopes they can meet them some day and thank them for giving his son a chance at life.

A steady stream of people flowed in and out of the room throughout the day, offering encouragement and support. Each hour on the hour, Sheridan updated them on the surgery.

About 6:30 p.m., Jaquiss came in to give the final update. The whole family listened intently as he spoke.

“Everything went well,” he said, adding that Christopher would be closely monitored for any sign of bleeding or other complications in the days ahead.

“That’s one of the happiest hearts I’ve seen in a while,” Jaquiss said later.

“Oh sweet buddy. Good boy,” she whispered. “It just sounds like everything has been just fantastic.”

Before George and Shannon were allowed back to see their son, Todd Murray, a pastor with the Bible Church of Little Rock - where the couple married 12 years ago - led the family in a prayer.

He thanked the Lord for giving the Schroeders the gift of a new heart for Christopher and the support of friends and family through their ordeal.

He asked that Christopher would be healthy and have a fast recovery, and that God would give the family strength through the trials to come.