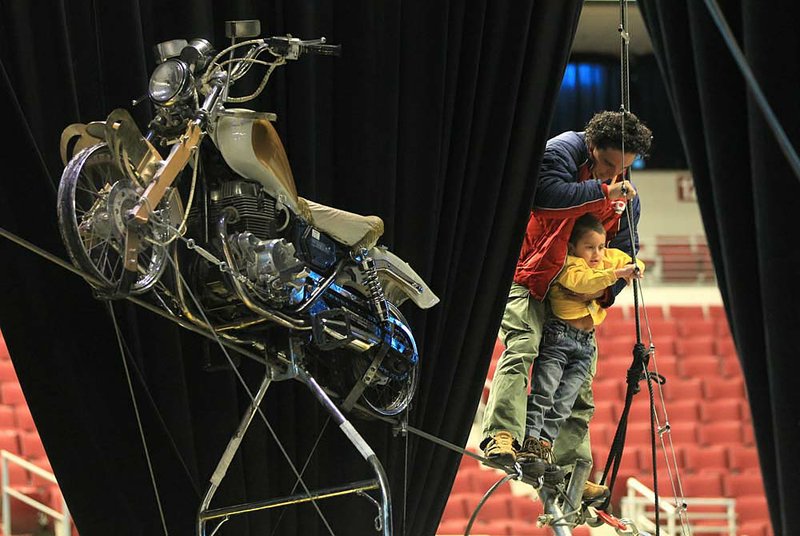 Circus performer Andrey Medeiros helps his 4-year-old son, Kristofer, learn to walk on a wire — a step toward Andrey’s aerial act on a motorcycle.

LITTLE ROCK — Daddy is leaving for work, and his 4-year-old son is upset about it. Normal is normal even in these surroundings of the Ringling Bros. and Barnum & Bailey Circus, except -

Daddy is 33-year-old Andrey Medeiros, and he is leaving on his customized Honda Rebel 250 motorcycle. The bike is balanced on a tight cable, and the trial run will take him up, up the slanted wire to 45 feet off the hard floor. Andrey is testing everything, making adjustments, tightening, revving the engine - rrrr-rummm! - doing all it takes to be ready for the night’s show, Illuscination, at Verizon Arena in North Little Rock.

His little boy, Kristofer, is watching from below, and Kristofer is hopping mad in the literal sense of actually hopping, frustrated that his legs don’t have enough spring to fly him 10 feet up to where Dad is.

“I wanna go up there,” Kristofer pleads.

Andrey relents. He stops the motorcycle, pointing to the ladder. A flexible ladder of this kind might be dropped from a helicopter to rescue someone from, say, a rooftop in a flood, and that stranded person might look at the snaky ladder and say, “Oh, no, I won’t climb that!”

Kristofer has tried the ladder before. “He likes to climb, to jump,” Andrey says, not surprised to see Kristofer take the first rung, and the second, swaying, and the third.

Move this hand, Dad instructs, move that hand, leg up, leg up, “you can do it.”

Kristofer is so close to the top, Andrey gives him a flying lift up. The aerialist rewards his son’s brave climb with a moment’s chance to sit on the motorcycle.

“I’m a bad example,” Andrey says. “He sees me do crazy things all the time.”

The big rule of circus is this: come time for the show, it’s all about the show.

“We learn no matter what,” Andrey says, “we do the best show.”

Andrey’s stock of circus tales includes the time he miscalculated, and the motorcycle, attached to the wire, flipped upside down like a dead bird on a telephone line. There he was, dangling from the bike, hanging on for six minutes (very aware of how much time this took) while the crew provided a rope for him to climb down. And the only thing to do, right after, was to go again. Repeat the trick that people paid to see. Do it right.

Kristofer, if he follows in his Dad’s red shoes, will be the fifth generation, as Andrey points out - several times. But “it will be his choice,” Andrey says.

Andrey and his wife, Viktoriya, tell the usual story of how they met. Boy meets girl, except -

The boy in this story is from Brazil, raised in Europe, and knew how it feels to be shot from a cannon by the time he met the girl, a gymnast from Bulgaria, who imagined the circus would be a temporary job for her.

“Everybody likes me,” Andrey recalls the situation “- except her.

To say he swept her off her feet is no love story cliche in this case, just a statement of fact.

Their wedding, six years ago, was in a different circus under the big top, and the show’s owner thought of something to give the newlyweds besides a toaster: namely the motorcycle and other gear for the act they perform as The Medeiros Troupe.

Andrey balances the bike on top the wire, and up he goes - 25 miles an hour, up 150 feet of cable - with a trapeze-like bar that hangs below him. Viktoriya and the act’s third member, Widny Neves, the “Empresses of the Air,” dangle and spin from the bar like a glittery set of earrings, matched at 110 pounds each.

The women’s acrobatic specialty is known with aching accuracy as the hair-hang. Another part of the show finds them lifted, whirling, by lines attached to nothing but their long, dark hair.

They trained and perfected the act for months, Andrey says. Some of the workings, they don’t tell. He keeps secret exactly how he modified the motorcycle to perform stunts that would make an ordinary bike sputter out. But he never has to worry that somebody might steal Viktoriya’s hair-hanging technique.

“You get used to it,” Viktoriya says.

There’s a reason for the expression “circus world,” Andrey says. “We have 80 different countries here,” represented by circus performers from all over the globe. “And five different languages,” he says, speaking English, but he could say the same thing in Portuguese or Bulgarian.

Circus people share the normal family dream of owning a home, and some do. Andrey and Viktoriya have a house in Florida, which they see every month or so, and where friends and family members keep the lawn mowed and the plants watered.

On the road almost constantly, living town-to-town in house trailers and RVs like an over-and-over camp-out in the parking lot, they still maintain a semblance of the same life as most families, except -

Kristofer goes to circus school, with a traveling teacher set up for class in a dressing room. The five students range from kindergarten, Kristofer’s level, to 11th grade, like a one-room schoolhouse.

Another parent might wonder if Kristofer is missing something - a doorstep to call home, maybe; a school that stays in one place, a backyard, a dog in place of an elephant.

Andrey wonders, too, but he really can’t answer.

Every night, the circus warns that circus stunts can be dangerous. These things - the high wires and springboards, the flips, the tumbling - are for highly trained professionals. Boys and girls, don’t try these things at home.

Andrey wants kids to listen. But he heard the same warnings himself as a boy, and he didn’t give an ear. By age 6, a little older than Kristofer, he was in the circus.

“My father is a lawyer,” he says, but his mother did a circus magic act. His three brothers became doctors and a lawyer, but he inherited his mother’s circus blood, “and once you have it in your blood, you can’t take it out.”

Ask him where home is, true home, and he won’t say a house in Florida; he’ll say the circus, and it seems to him that he and his family are home a lot more than most families.

“We work together,” he says. “We spend more time together as a family than if I had a day job.”

Kristofer receives a daily bonus lesson he wouldn’t pick up the same anywhere else, Andrey says: how to be fine when, all around you, life is a circus.

Circus children learn to pay attention, he says. “They have to, because that’s their life.”

Viktoriya once imagined a “normal” life. Circus people say “normal” to mean outside the circus, like outside of everything important. She imagined this “normal” life especially for Kristofer, but he doesn’t seem to want the ordinary.

“Like every mother, I worry,” she says, “But if he wants to be in the circus, I will teach him everything.”

Backstage is a mundane, mostly normal-looking clutter - the classic stuff-in-plastic tubs look of the great American garage, if the normal garage also made room for a teeter-totter, bank of sound gear, a bunch of feathers, a pile of Hula Hoops.

The most sought-out piece of equipment is the washer dryer combo. Musclemen with laundry baskets in their bulging, tattooed arms wait behind elfin acrobats for a crack at the washer, all abiding by the posted rules that fill a page. Basically: costumes are the first things to wash, and give somebody else a chance.

Kristofer, with Andrey’s help, climbs down the ladder - down from the wire, down from the rarified circus air, back to something like normal, leaving his daredevil father with a beam of pride, except -

There’s a normal thought, too, a second thought.

“He’ll realize he can do this always,” Andrey says. “I’m kind of scared what he’s going to do when he’s 7.”Next stop for the circus and the Medeiros family will be the Fed-Ex Forum in Memphis, Thursday through Sunday.