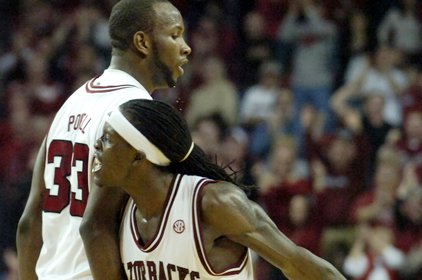 Arkansas' Courtney Fortson (4) celebrates with teammate Marshawn Powell (33) after Arkansas took the lead in overtime against Auburn in an NCAA college basketball game in Fayetteville on Saturday.

A glance to the sideline late in the second half revealed Courtney Fortson struggling to get out of his chair on the bench after timeouts, his jersey untucked and his shoulders slumped. Before Michael Washington hurt his left shin/ankle after a bang-bang play with 8:09 remaining in regulation, he also looked sluggish and tired, and was growing frustrated with some physical scuffles underneath the basket.

With Washington out, the Hogs needed Fortson — again — to drive them to their fourth straight win in the SEC.

And the Razorbacks — especially Fortson — found some inner strength at the end of regulation and in overtime to gut out a win. Fortson, once again, was the MVP and scored 10 of the Hogs' 15 points in overtime, including his only three-pointer and, at least for him, an unconventional mid-range jumper to put Arkansas ahead 76-73 with 40 seconds remaining.

Yes, Arkansas (12-3, 5-3 SEC) was ahead 80-73 at one point and Rotnei Clarke and Fortson hit some free throws late before Frankie Sullivan's 52-foot shot hit the back of the iron, but Fortson's trey and mid-range jumper were his biggest shots of the game. Why? Because those are shots Fortson usually does not make or take. But, when the team needed something big, he stepped up when no one else would or could.

"It's not really our plan, but it just kind of happens," Pelphrey said. "We try a lot to get him in space, put him in certain situations where he's able to just play ball and read. The thing I appreciate about him, he's got such great instincts. He's a really, really cerebral basketball player."

Fortson has been the very definition of clutch, and for anyone believing the Razorbacks are not a different team with him in the lineup, let me toss out some numbers to squelch your beliefs.

Fortson, in Arkansas' last four games, has scored an average 24 points and has taken an average of more than 12 free throws in each win. He's hit 36-of-49 free throws (73.4 percent) and is hitting 50 percent from the field.

WholeHogCast: Four in a row

Fortson looked out of sorts at times against Mississippi State and Alabama to start the SEC season, which was just two and three games, respectively, off a 14-game suspension. He took 41 shots in those games, connecting on a 34 percent clip. Pelphrey admitted that his sophomore star may have been taking too many shots at the time. Pelphrey was especially correct in the Mississippi State loss, when Fortson took 26 shots. Ever since, Fortson hasn't taken more than 18 shots and has been more in control on drives to the basket, which is his forte.

And then there's the unconventional — his big-time three-pointers and mid-range jumpers. He hit 3-of-6 treys against Mississippi State last week when the Hogs needed it most while hitting just 7-of-21 treys. Put simply, wherever the Hogs struggle most, Fortson has usually stepped up to fill the void.

Washington out since the 8:09 mark in the second half? It's fine, Fortson is there.

Clarke can't hit a three-pointer, and finishes 3-of-9 beyond the arc? Fortson is there.

The Hogs' big men can't rebound on the defensive glass? Fortson is there with a game-high eight defensive boards.

Perhaps most impressive, though, is that Fortson has done this with his legs tiring and Arkansas playing three games in one week. Arkansas' win at Ole Miss was delayed to Sunday because of wintry weather, forcing the Hogs into a unique SEC schedule this week.

"We haven't done too bad with us playing a lot of games. Obviously, we can't hold up," Pelphrey said, pausing. "If we had to play again on Tuesday, I don't know what would happen. We may have to call the game off. We're exhausted."

But the Hogs are atop the SEC West with a struggling LSU coming to town Wednesday night. Who would have thought the Hogs would be the leader of the pack after their worst SEC loss in history (31 points) at Kentucky on Jan. 23.

But, they — like Fortson and his unconventional plays — are proving us wrong.

"We understand, too, that we could have lost any of those four games as well as we won them," Pelphrey said. "We understand that. We understand who we are, but for what was said and written about those young men,really all season long ... and after that game in Lexington, nobody gave them a chance to be where they are right now.

"It wasn’t because they’re so great, so talented, or played so well. It just happened. But they deserve the credit for that."

The next question spills from the lips quickly, however. Can Arkansas keep up its streak in the second half of the SEC schedule?

The season after the huge loss at Kentucky wasn't over, Pelphrey re-itereated. And it's not over today.

"There is a lot of basketball to be played, and anythiing can happen," Pelphrey said. "And it usually does. Hopefully a lesson that everyone learns with basketball and life is that you get up and you go to work the next day, no matter what happened the day before.

"... You better stay humble and hungry and keep working. Anything else besides that is just fool’s gold. Something bad will happen to you."

For now, Arkansas will take the much-needed break.

Brandon Marcello is the online sports editor for the Arkansas Democrat-Gazette and Northwest Arkansas Newspapers. He can be seen regularly in WholeHogSports.com's WholeHogCast and maintains a Razorback-related blog, The Slophouse.