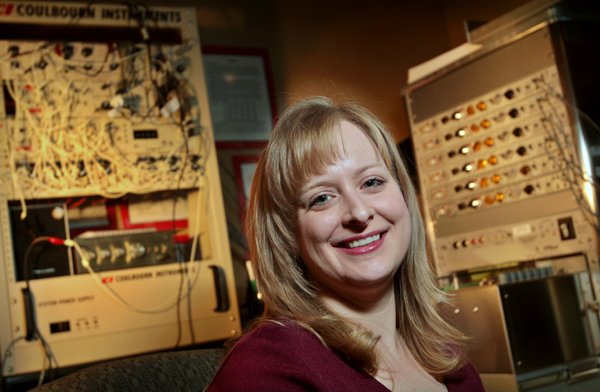 Hendrix professor Dr. Jennifer Peszka has done research on how students grades are effects by the quality of sleep they get.

CONWAY — Molly Welch well remembers her freshman year at the University of Central Arkansas, where she was living in a dorm and surrounded by wide-awake friends, well after midnight.

Her typical bedtime was 1:30 or 2 a.m. “We’d just stay up late, whether it was going out” to eat, talking or watching movies, recalled Welch, now 22.

Late nights in college - whether due to studying, partying or chatting - aren’t new. But Hendrix College professor Jennifer Peszka and two other researchers hope to complete a study in 2010 on how sleep habits affect students’ grades.

The study began in 2006 by questioning 89 incoming freshmen at the private, largely residential campus in Conway. The researchers followed up with more questions at the end of the students’ freshman year.

The researchers hope to find and survey all 89 students again in the coming semester.

The professors compared the students’ sleep patterns and grade-point averages in high school and college. But as it turned out, even those students who had been larks became more like owls in college.

“Morning types starting fitting in with what people around are doing,” Peszka said.

The researchers also compared the students’ college grades with their high school grades. The larks’ averages fell in college by 0.7, while the owls’ fell by 0.98, Peszka said.

“Regardless of what college students are doing ... they still live in a culture that runs by a 9-to-5 kind of clock,” Peszka said.

“We have classes that start at 8 o’clock in the morning.” So students who stay up late may be “more likely to miss class” or “can’t focus on what’s going on in class.”

The researchers also looked at “sleep hygiene,” or voluntary behaviors that can either help or interfere with sleep. Taking long daytime naps, drinking caffeine or worrying shortly before bedtime, and working in bed are among the behaviors that can cause sleep problems, Peszka said.

“What we found ... and this won’t surprise anybody ... when [students] went from high school to college, everybody’s sleep hygiene got worse,” Peszka said.

But the researchers couldn’t find any difference in sleep hygiene’s effect after the students were in college. “And we can’t explain it,” Peszka said.

Occasionally, Welch stays up to 1 or 2 a.m. to prepare for a major test or paper. “But that usually is rare,” she said.

The result: Her grades have improved from some C’s and “maybe one D” when she was living in a dorm and getting much less sleep to A’s and B’s, even though her studies are more challenging now.

“I had a lot of distractions” in the dorm, Welch said. “Combined with the lack of sleep, that definitely hurt my grades.”

They presented the study in Seattle last summer at a conference of the Associated Professional Sleep Society.

Not all students are convinced their grades suffer from lack of sleep.

Molly Welch’s sister, Maggie, is a junior living in a dorm at Henderson State University in Arkadelphia and has an overall 3.7 grade-point average.

“I do stay up late studying” after handling duties as a resident-hall assistant. “That kind of has to go with balancing a social life, too,” she said. “It doesn’t hurt my grades. It hurts my exhaustion level because I definitely am stressed a lot.”

Maggie Welch, 20, said she usually turns in about 2 a.m. and gets up about 8 a.m. for her first 9 a.m. class. By the weekend, she still has enough energy to stay up equally late watching movies, but she can sleep late the next morning.

Still, Peszka said the evidence from many studies is clear: “People should not cram all night the night before a test.”

“We definitely know that studying is better when it is spaced out rather than cramming,” she said.

Even so, Peszka hasn’t forgotten how she first got interested in sleep research. She was attending Washington and Lee University and studying for a test about 2 or 3 a.m. when she noticed a poster. Its subject: the importance of sleep.